I’ve reached the point where I can start looking over the GHCN v4 data.

The process of getting it loaded and some degree of ability to compare it with prior v2 & v3 versions is in a posting here:

While the equivalent v3 graphs were produced in an earlier posting. I’ll include one of them here for comparison.

Without further ado, here’s the graphs of “baseline” vs “now”:

Ive used the entire 1950 to 1990 inclusive period as the “baseline” interval since that covers both Hadley and GISS and the v3.3 data seemed to cover that whole period with extra thermometers too. Plotting “now” vs “baseline” on one graph is a bit muddied (as you will see below) so I broke them out.

To me, it looks like an improvement, but the same problems still exist. MORE coverage in the “baseline” than in the present. Oceans still largely unknown. LOTS of instrument changes (many areas show different shapes and densities). Lots of empty places stay empty (Sahara, northern Canada).

It is as though the same methods and games are being applied, but with a lot more “Go” pieces on the board. (I like “Go” more than chess. Different, but more. To understand the Chinese approach to strategy, play Go for a few months…)

When I first modified the v3.3 code I forgot to make the “now” 2018, so this graph still uses 2015. It ought not make much difference for this graph. 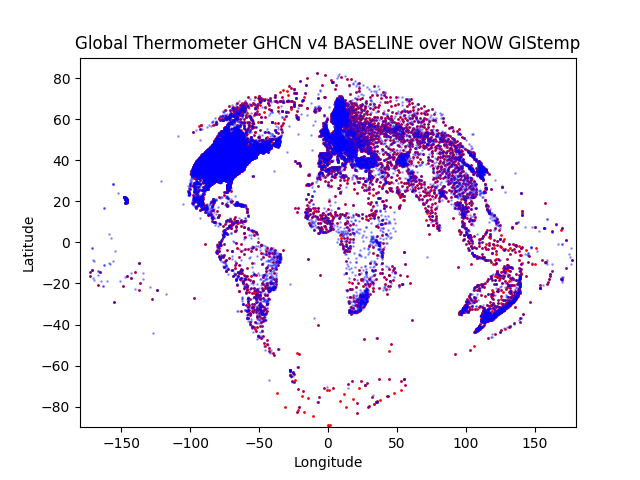 Not a lot to say at this point. This is just the “First Fire” jumping off point.

I was very happy to see that the codes I’d written for V3 worked fine with V4 with only minor changes (like different table names) though slower due to the roughly 4 x more stations providing data.

These maps show that they still could not change the reality that the USA and central Europe have most of the historical temperature data. The geographical limits of what is known still apply. Especially in the past.

There is much more coverage in this set, but still with holes in lots of places and with “instrument change” still running all through it. (Not much you can do to change the fact that people bought new instruments in decades past, wars were fought, and things moved around).

Overall, my first blush of it is that it is an improvement. Over the next days (weeks?) I’ll poke and prod it some more and see if that holds.

A technical managerial sort interested in things from Stonehenge to computer science. My present "hot buttons' are the mythology of Climate Change and ancient metrology; but things change...
View all posts by E.M.Smith →
This entry was posted in AGW Science and Background, NCDC - GHCN Issues and tagged GHCN, thermometers, v3, V4. Bookmark the permalink.