As part of working up the ambition to re-start the back yard garden, I sprouted some seeds a while back. Now it’s time to “pot them on”. Here’s the result. A tiny garden, one that is also portable…

Started 24 days ago, or a bit over 3 weeks, I’d put the sprouted seeds into small plastic “six packs” for about 2 weeks. Then the beans were “potted on” into larger pint sized plastic pots. Yesterday the beans (that had been “2 to a pot” were separated and placed 2 per large square pot while the largest squash were put “one in the middle”.

Of the 12 original beans, all survived. Of the 12 original squash seeds, only 8 made it to the “true leaf” stage. One or two of the others still might sprout, but I doubt it. Usually if the seed swells and looks like it is starting to push out a root, but doesn’t, that means it was just hydration pressure, not life. Still, a 2/3 germination rate for self saved seeds from a decade back under good but not ideal conditions (refrigerated not frozen) isn’t at all bad.

So here’s the original ‘6 pack’ trays. I’ve moved a few of the smallest squash up the larger round pots and had started some garlic cloves in a tray of shallow dirt, so moved them to the bigger 6 pack (foreground), while the smaller one still has the 4 squash seeds that looked like they were going to sprout, but didn’t.. 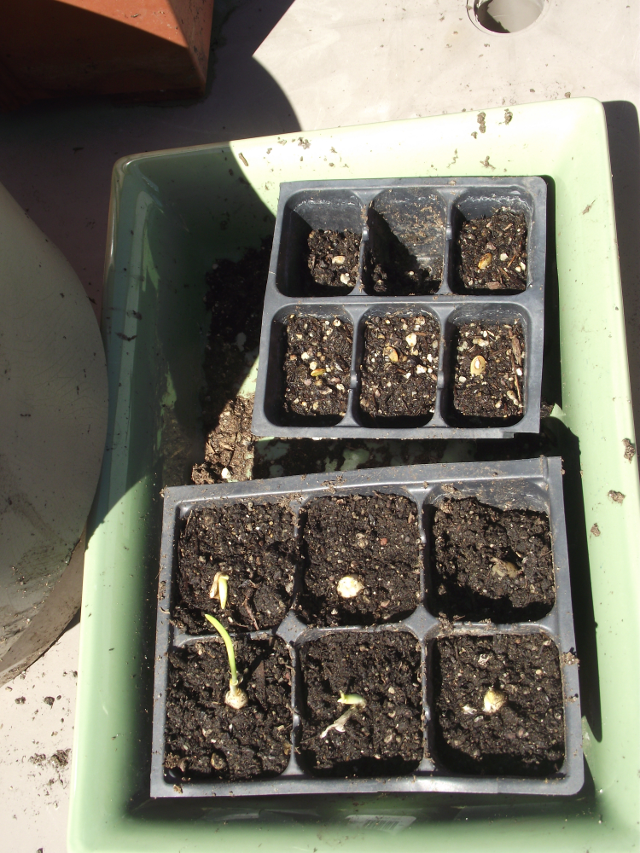 Here’s the round pots:

In the background you can see the 9 inch x 11 inch glass baking dish used to start the garlic. I kept the soil fairly wet in the bottom 1/4; as sprouts, and especially onions and garlic, don’t like to dry out. In the plastic tray I have the 6 plastic pots that had been used for 2 beans / pot straight from the sprouting tray. In the front left is one little bean that had a rough start. One of the bean halves broke off as it was stuck getting out of the skin. The other got knocked off when I split it from the bigger bean sharing the pot (to plant out that one). So now he’s got the whole pot to himself and can try to catch up. We’ll see if it’s “stunted for life” or now, in the sun, makes a big recovery.

The three squash that were smallest and not ready yet for the Big Pot got potted on to the round pots around it. Then in the far back are a couple of the biggest garlic sprouts. They are the survivors of 2 heads of garlic that sat in a bowl in the kitchen for about a year+ and slowly desiccated. These were THE most stubborn of the cloves (the ones that survived) so I decided they deserved a shot at life in Darwin’s Garden ™.

Next up, the Big Pots. These have a dirt area one foot on a side and about a foot deep. This means you can do the “square foot garden” plan in them directly. They are also small enough to be easily portable. I’m not planning on taking them anywhere just yet, but I am practicing for what might be done with a motor home / coach. Maybe a “Garden Trailer” ;-)

In the background you can see the Kingsford BBQ that I reviewed about a year ago. While it has survived the winter out doors, it is also now growing a good bit of rust on the outside. The inside is still fine. While I’d complained about the prior reviewer saying it turned to rust immediately, it clearly isn’t able to survive long outdoors even in California. In a salt air or high humidity location it is likely a “use one summer” or clean and store dry after each use only. I’ll be tossing it a bit later this spring. My Pile Of Bricks BBQ, meanwhile, is still going strong. I’ll reuse the grill wires from the Kingsford for another POB-BBQ.

In the foreground you can see the squash in the center of each pot, and then 2 bean plants on each side. This ought to be a bit crowded, but not too bad. The beans are a small bush type with a recommended 4 to 6 inch final spacing. The squash in an “8-ball” small round type. It would likely be happy with the pot all to itself, OTOH, sharing with a nitrogen fixer is traditionally a good thing. We’ll see.

Since just 2 of these plants give enough squash to make even a regular squash lover “over supplied”, having 8 started is serious over-supply. I’ll likely end up with just 4 pots being the main garden and then one or two “run to seed”. I have no idea what 12 bean plants will provide as I usually grow pole beans. OTOH, I’ve occasionally had ‘some critter” top a whole row of young beans (which is what started me on the path of sprouting in a tray, planing in small pots indoors, and only planting out when larger) so no sense counting my beans before they pod…

Were I seriously in need of a food supply, I’d have planted radishes and greens early. They would be approaching “first harvest” already. There are old folks stories about the “first radishes of spring” as folks (finally!) got to eat something fresh instead of living on root cellar (that often ran out end of winter) and dry goods. Root crops don’t transplant well, though, so are not well suited to my tray to pot to container approach here. For them, I’d likely just plant a large container of radishes and carrots as soon as frost kill was past. (Or put them under light indoors until the weather was good enough to set them out.) I once grew a whole flat of radishes in my bedroom ( I was 12 at the time) and was thrilled to watch them reaching for the window / light… until they all got way too long, fell over and bent their stems, and died. Many plants, including radishes, need some UV light to know they have gotten above ground and can stop extending. Note to self: Buy UV bulb for indoor sprouting / growing… Sold in pet stores for lizards. About 1/2 hour / day ought to be enough, but the seedling will let you know by stopping the extension, putting out more leaves, and greening up.

The “soil” in each pot a bit “odd”. I have about 4 inches (compressed) of whatever I mowed off the front lawn in the bottom. It will compost / rot before the roots get to it. Above that is about 4 inches of cheap “garden soil” that is really just wood chips 1/2 composted and bagged. 3 cu. ft. for $8.47 at Home Depot. Not very good soil, lacking in minerals, and not composted well enough. Then the top layer where most of the roots will be is a very nice “bio-char” potting soil. I’ll be using Miracle Grow fertilizer to help with this whole thing. Normally I mix bagged compost (or my own) in with 1/2 dug dirt from the yard / garden; but as I still have not reached the dirt out back, this is an alternative. IF it doesn’t do well enough, then should that manifest, I’ll just dig a hole in the garden square and de-pot the whole root ball into it. Water in, and move on. But I’ve used this pattern before and it did well. I’ve even used broken up twigs in the bottom 3 inches. Eventually some mold or other breaks them down.

When the dry season comes, I set pots in a Builders Tub. These are about 6 inches deep and a couple of feet by 3 ish feet. Sold for things like mixing plaster and such at the hardware store. Then I keep water in the bottom just about 1 inch above the bottom hole of the pots. This lets them keep the soil moist without a lot of tending by me and without a lot of wasted water. Any water in excess gets caught in the tub and soaks back up into the pots over time. VERY useful in a dry climate like here. Probably a mistake in places with summer rains.

So there you have it. My Tiny Garden. Portable & Efficient. IF the packages can be believed, I ought to have some harvest from these plans in about the last 2 weeks of April. Or I’ll have some very happy yard critters ;-) I don’t believe squirrels eat squash… then again, I didn’t know they liked Tangelos until I saw them hauling one off to eat on the fence. These pots are right next to Squirrel Highway (the fence) so “we’ll see” ;-)

A technical managerial sort interested in things from Stonehenge to computer science. My present "hot buttons' are the mythology of Climate Change and ancient metrology; but things change...
View all posts by E.M.Smith →
This entry was posted in Emergency Preparation and Risks, Food, Plants - Seeds - Gardening and tagged Beans, garden, garlic, Pots, seeds, Squash. Bookmark the permalink.

14 Responses to My Tiny Portable Garden