Sometimes you need a bit of a laugh. One of the things I like about NOT being a “Woke SJW” is that I can still laugh at all sorts of funny stuff. There’s whole books full of “Forbidden Humor” they can’t have, that I get to enjoy.

So needless to say, I found myself starting with a good chuckle over Pepe The Frog with rainbow hair, and slowly working up to a full on laugh at the folks going BSC (Bat Shit Crazy) about it.

Seems the Pepe Rainbow Hair is a “put up job” for the express purpose of reclaiming the rainbow while triggering as many SJWs as possible. A real “Two Fer!”. Named “Honkler”, I’ve now come to enjoy the little guy… It also seems that the process of realizing you either need to cry or laugh, and embracing the laughing side of life is something Honkler is intended to stimulate. The process of “going there” being called being “Honk Pilled”. So after watching this video I realized that now, I, too, have been Honk Pilled! Laissez les bons temps rouler! (Let the good times roll!)

I think maybe I need to get me a rainbow wig and a red clown nose… for those “special” occasions ;-) ( I already look a bit like a frog, but maybe some green face paint would help the effect ;-)

Now you might think there’s a Wiki Page for everything. Some of the most obscure things on the planet have a wiki page. Well, looks like Honkler is Persona non grata:

Did you mean: hockley

The page “Honkler” does not exist. You can ask for it to be created.

There were no results matching the query.

But no worries. These folks: https://www.reddit.com/r/honkler/comments/b9l23w/honkler_union_flag/

But they even have a nice flag too: 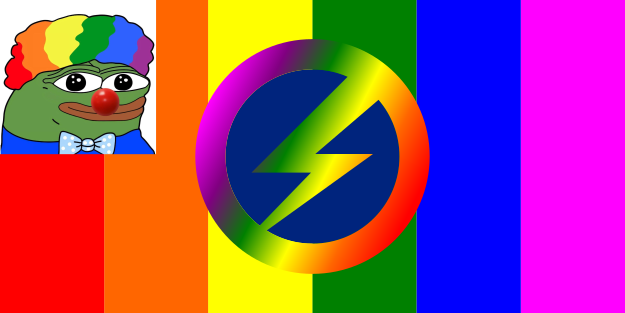 Just remember that now “Honk” is going to be “racist” so EVERY car, truck and train on the planet is now Racist!!! Welcome to Clown World! Honk Honk!!!

A technical managerial sort interested in things from Stonehenge to computer science. My present "hot buttons' are the mythology of Climate Change and ancient metrology; but things change...
View all posts by E.M.Smith →
This entry was posted in Humor, Meme, Political Current Events and tagged Clown, Clowns, Honk, Honkler, World. Bookmark the permalink.