I’ve wanted to do an A/B Comparison of “Anomaly Processed Temperatures” with changed instruments since the very first time I ran GIStemp, about a decade ago. Here, I finally get to “scratch that itch”.

They, “Climate Scientists” and supporters of Global Warming, claim that since their dire claim of warming is all “done with anomalies” the actual instruments used does not matter. Complaints about instrument change causing problems are often summarily dismissed, often with sneers and jeers, as being ignorance. Here I show otherwise. Instrument selection DOES change the anomalies produced.

To me, this was obvious just because some places are more volatile than others, and some move in opposition. “High Cold Places” have a wider range. Over the year and over the day. Places near water never get as hot as dry places. Similarly, the hot inland Central Valley of California will hit over 100 F in Summer, the hot air rises, and it pulls an ocean fog blanket over San Francisco that can cool down to the 50-60 F range on the same day.

One one occasion I left San Jose in August at 105 F and drove to San Francisco to find it a cold dank 55 F, then returned home to the heat later in the day.

This simply MUST show up in the “anomalies”. But I could not change GIStemp to demonstrate that and have it still run. (It was way too sensitive to changing the data inputs and would hang if the “wrong” stations were deleted, so I had a long ‘trial and error’ phase to slog through if I wanted to do that).

Now I can show it using these anomaly processed temperatures.

In version 3.3 and prior of GHCN, both Russia and Kazakhstan were divided into European and Asian parts, roughly at the Urals. This was denoted in the Station ID as a leading 6 on the first three digits for Europe, or a 2 for Asia. In version 4, the data are combined into one country abbreviation. RS for Russia and KZ for Kazakhstan. Since comparing a “country’ requires combining those two “country codes” in GHCN 3.3, I had to work out a way to do that. that process is detailed in this documentation. I’ll be including the Python code used to make the combined graphs in the Tech Talk section down below.

The Difference In The Anomalies

These are the differences in the anomalies of v4 vs v3.3 data. The first graph is including Europe in both sets, the second graph does not have Europe in the 3.3 data. They are dramatically different. WHAT instruments are used DOES change the anomalies. Which rises the question of how much of “Global Warming” is actually just what instruments are used in any given year. How much of the difference in the first graph is due to just changed instruments in v3 use? 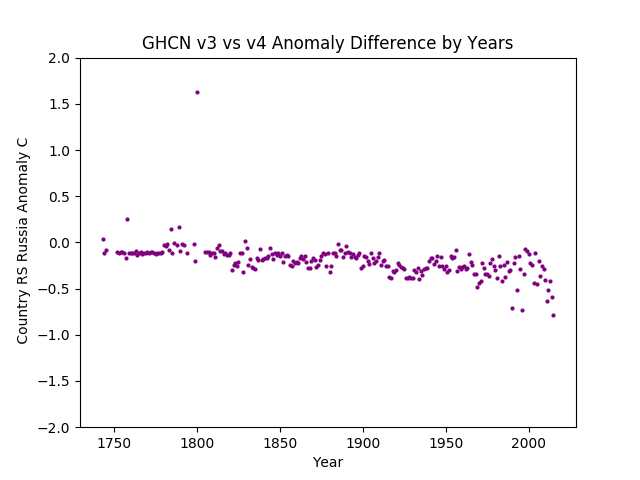 Note that the “difference” graph is less scattered with more common instruments in the set. That makes sense as there is now less difference in total instrument data. It does hint that a dispersed or wide ranging Difference Graph can be an indicator of a lot of instrument change; implying you are measuring instrument change more than climate changes.

Here we have plotted the actual anomalies in v3.3 and v4. The above graphs just subtract one set of these dots from the other to get the difference in the dots. The most obvious difference is just that all the early years data, the first thermometers, are all in Europe. So we only get black dots in the early years (GHCN v3.3) if Europe is included. But notice that the other black dots do shift position, even if only by a few 1/10 ths C. Then again, all of “Global Warming” is just a few 1/10 ths C. So is it warming, or are instruments included in the data changing over the decades? Was adding a HUGE number of data points to the “baseline interval” of GISStemp and Hadley (roughly 1950 to 1990) really helping, or assuring that years since would be different?

First graph is with Europe included, 2nd graph is Asia only for GHCN 3.3 data.

The changes here are harder to spot. The reason is simple. Only one station is counted as in Europe in the v3.3 data:

So that’s about 82 years of monthly samples for one thermometer. All the rest is from “Asia” so swamps that one station in the rest of the data:

29 stations to one. Still, there are visible effects even from one station. Look at the 2000 era “anomaly difference” graphs and note the 2 dots that are above the pack with Europe included, but in the pack without it.

The Difference In The Anomalies 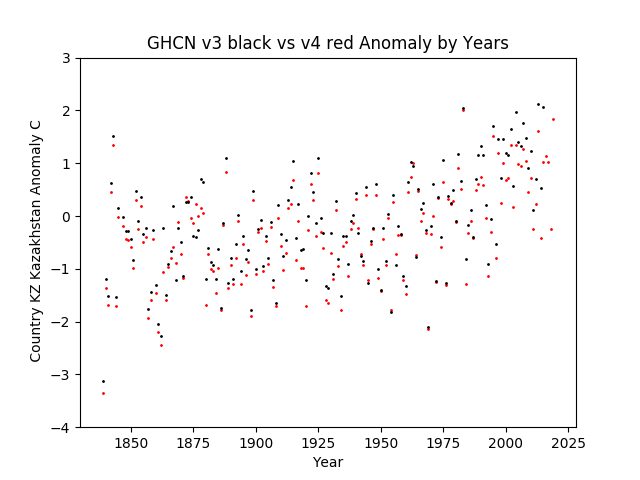 My observation on this is simply that even using “anomalies”, instrument change MATTERS. “Climate Scientists” often claim that since they use anomalies, the exact instruments in use does not matter. Compare these graphs. They are different. All processed with anomalies, and the Asian thermometers are the same data, so the difference is all down to “instrument selection”.

I think this matters, and certainly matters a lot more than the Global Climate Cabal claims, as they claim it does not matter at all.

I’ve worked out a method of combining the 2 “countries” of European Russia and Asian Russia used in GHCN v3.3 and prior for a “apple to apples” comparison with the v4 data (where there is only one ‘RS’ Russia). The same process is used to unify the Kazakhstan data (KZ and K!).

The produced “Yearly Country Anomaly Statistics” table, yrcastats, is used to produce the “Difference” graphs above.

This is done via a Python program that uses an SQL interface to get the data from the database table, then uses a plotting library to produce the plots above. Here’s that program for Russia. All the “magic sauce” is in the creation of a combined yrcastats table so this program in unchanged from the prior run:

I’ve line wrapped some text to make it more readable without scrolling off the right side of the panel. As Python is “space as syntax” dependent, those lines would need to be turned back into single lines for this to run if cut/paste copied.

The program that produces the plot of all the anomalies uses different tables, the anom3 and anom4 tables. To produce them, all I needed was to add an OR clause. I’ve coded that “Country Abbreviation” for Russian Europe as “R!” in the anom3 table, so simply selecting for “C.abrev=’RS’ OR C.abrev=’R!'” gets both the European and Asian anomaly data for each station, that is then averaged inside that year. So why didn’t I do that before? Because I wanted the anomalies shown to match the difference chart they were used to make. Only once I could make a combined difference chart does this combined anomaly plot match it.

Do note that this “method” generalizes. I could use “WHERE abrev=’RS’ OR” and any other countries in combination to make all sorts of ‘apples to oranges’ comparisons. So “how would the anomalies look if we include Switzerland in Europe, vs left it out?” can be shown. Does someone at NOAA do something like this to decide what thermometers to drop for the series used? What ones to include in the “baseline” but not in the present? It can be done…

I’ve bolded the bit that changed from prior versions and line wrapped some text to make it more readable without scrolling off the right side of the panel.

The Kazakhstan programs are the same other than using “KZ” and “K!” and the name of the country.

A technical managerial sort interested in things from Stonehenge to computer science. My present "hot buttons' are the mythology of Climate Change and ancient metrology; but things change...
View all posts by E.M.Smith →
This entry was posted in AGW Science and Background, NCDC - GHCN Issues and tagged Anonmaly, GHCN, Temperature. Bookmark the permalink.

18 Responses to What Difference Does Instrument Selection Make To Anomaly Processed Temperature Data?