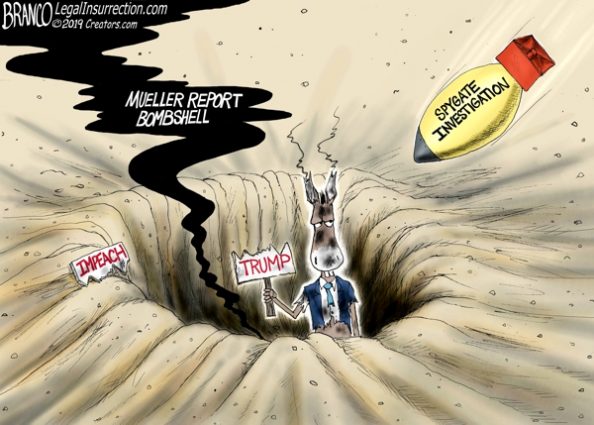 (From: https://legalinsurrection.com/tag/a-f-branco/page/4/ though just which page will change over time.) 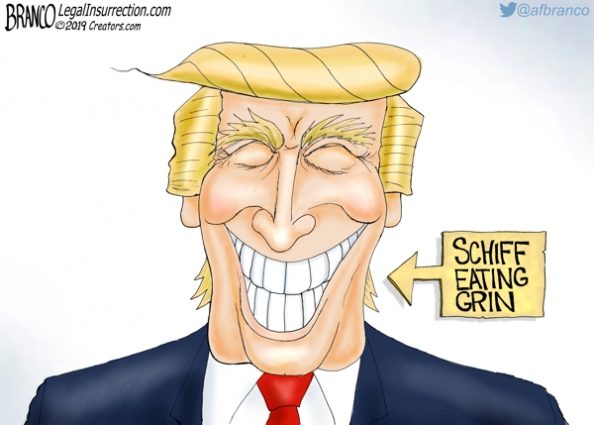 This is a video from Tim Pool where he explores the current media panic over Trump IMPROVING in the polls as the Impeach Show drags on.

Approval among Independents up 10 points. Shows Dr. Hill was factually false, that mostly Conjecture was offered in testimony. Does cover the “Bombshell Fatigue” (like battle fatigue but different ;-) and the repeated “walls closing in”…

A Gallup poll found 43 percent of respondents supported Trump’s performance, 2 percentage points more than the end of October poll. The disapproval rating of the president dropped to 54 percent from 57 percent in the previous poll.

The bit Tim reads is below that in the link; and in the video.

By
Marc A. Thiessen
Columnist
November 20, 2019 at 12:48 a.m. UTC
As we enter week two of the House impeachment inquiry, it seems pretty clear that Democrats are suffering a massive ordnance failure. Their “bombshells” are not exploding.

The first unexploded bombshell came when acting ambassador to Ukraine William B. Taylor Jr. testified that a member of his embassy staff had overhead a cellphone conversation between President Trump and Gordon Sondland, the U.S. ambassador to the European Union, in a Kyiv restaurant in which Trump discussed the need for Ukrainian officials to pursue “investigations.” Aha, Democrats cried! A firsthand witness could now testify they heard Trump pressing the Ukrainians for investigations.

Um, so what? Trump had already released a rough transcript of his call with Ukrainian President Volodymyr Zelensky in which he had pressed him for investigations. The overheard call told us nothing we did not already know. Indeed, the only one likely to get in trouble from this revelation is Sondland, who violated operational security by calling the president in public on an unsecure cellphone.

Nothing Republican Rep. Devin Nunes does during the hearings makes sense if you watch it in the moment. When it’s posted on Facebook later, though, it works perfectly.

Democrats have hoped that the impeachment hearings might bridge the vast divide between the how the ideological factions in the country view President Donald Trump’s wrongdoing. On Wednesday, as Gordon Sondland, the US ambassador to the European Union, read his opening statement, liberal Twitter users buzzed optimistically that it might finally be the moment.

“I know that members of this committee have frequently framed these complicated issues in the form of a simple question: Was there a quid pro quo?” Sondland said. “As I testified previously, with regard to the requested White House call and White House meeting, the answer is yes.”

But there are two impeachment hearings unfolding in the nation’s capital. One, carried out by the Democrats, is designed to ascertain the truth as to whether Trump sought a “quid pro quo” deal with Ukraine to get the country to investigate Joe Biden and the 2016 presidential election in exchange for aid money. The other, being carried out simultaneously by the Republicans, is quite different. Instead of trying to learn the truth, it seeks to create not just a counternarrative but a completely separate reality.

Trump asked about the Clinton Server and Burisma (HUNTER Biden, not Joe).

Having 2nd and 3rd hand reports of how someone FELT about an overheard conversation just doesn’t stand up to the direct QUOTE from POTUS that “I want nothing from” (Ukraine) and “No quid pro quo”. DIRECT orders from POTUS overrule rumors by partisans.

Then, that it’s all being done in a Communist Style Show Trial with no defense witnesses, no defense council, a hidden secret rumor monger as the “source” and worse, with the Prosecutor as Judge and Jury… that’s just criminal.

So the “media” wonder why nobody listens to them anymore? Well there’s this story about a boy and crying “Wolf!” a lot… We now know to NOT believe a thing said in the YSM / MSM and go watch the video ourselves, read the documents ourselves.

Oh, and about that Biden knocking up a woman he then scorns while boffing his brothers widow… while creaming off $Millions in GRAFT and CORRUPTION. Think maybe it’s better to ask politely if there was some crime going on prior to handing over more of MY MONEY to a country with that kind of history? I do. I’d have been MORE pissed had POTUS just sent them a pallet of cash (Oops, my bad, wrong POTUS) check and THEN found out there was corruption.

At about 14 minutes he details the evidence showing that Dr. Hill was wrong about saying it was a Russian Plot, again. Yet it was clear that Ukraine was the source of the 2016 “meddling”. Then covers the Embezzlement from Burisma that was handed over to Hunter… and that Ukraine is now saying it was real. “Receiving Stolen Money” is, last I looked, a crime…

So “more in the video”, but do enjoy the YSM having that yellow stream run down their pants as they wet themselves in panic. When in doubt, just chant “8 More Years! 8 MORE Years!!!” ;-)

A technical managerial sort interested in things from Stonehenge to computer science. My present "hot buttons' are the mythology of Climate Change and ancient metrology; but things change...
View all posts by E.M.Smith →
This entry was posted in Political Current Events and tagged Impeach, Media, POTUS, Trump, Winning, YSM. Bookmark the permalink.