Is The Earth Not A Planet?

I’ve taken issue with the “rule” used to demote Pluto to Dwarf Planet on prior occasions. There’s a bunch of reasons why I think it was a bogus act. I’ve also proposed a different and simpler definition of planet that would let folks have Pluto be, or not be, a planet via a simple choice. Just choose a diameter that you find “big enough” about 2000 km for Pluto to remain a planet, about 2500 km for it to be out of the planet pool. So anything orbiting the Sun, not orbiting some other object, and bigger than that diameter is a planet.

This also solves some other problems, like having NONE of the planets be planets in the early solar system as none of them had ‘cleared the area” of other stuff. Then just one day they have cleared “enough” and suddenly pop in to being a planet? Seems dodgy to me. Then what happens when some big comet breaks up and you get a debris field pelting your surface for 20,000 years? That happened to Earth with the Taurids and likely was the source of the impactors that resulted in the Younger Dryas event.

The current definition has big things orbiting the sun swapping from not a planet, to planet, to not, to planet as stuff arrives and leaves. Just not very clean. Rather like saying that if two bodies orbit a barycenter inside one of them, the other one is a moon, but if it is outside, they are planets. This results in our Moon becoming a planet when the orbit gets a little bigger in a few millions or billions of years. Better would be to just say “never goes retrograde in orbit of the sun and always concave to the sun”. Thought that would promote us to a binary planet system already, but at least it doesn’t change.

The other problem with the “clear the area” is that there’s some Magic Handwaving as to when that’s happened. They say it must be mostly clear, but doesn’t need to be 100% so the stray comet doesn’t make you ‘not a planet’ if it shows up. But how many is too many?

We’ve been finding ever more “stuff” in our “neighborhood”. In fact, I’d assert we’ve gone way past “a few” and are firmly in the land of “surrounded by debris”. To the extent that is true, then Earth is NOT a planet. (Hey, their definition, not mine).

So let’s look at some bits. 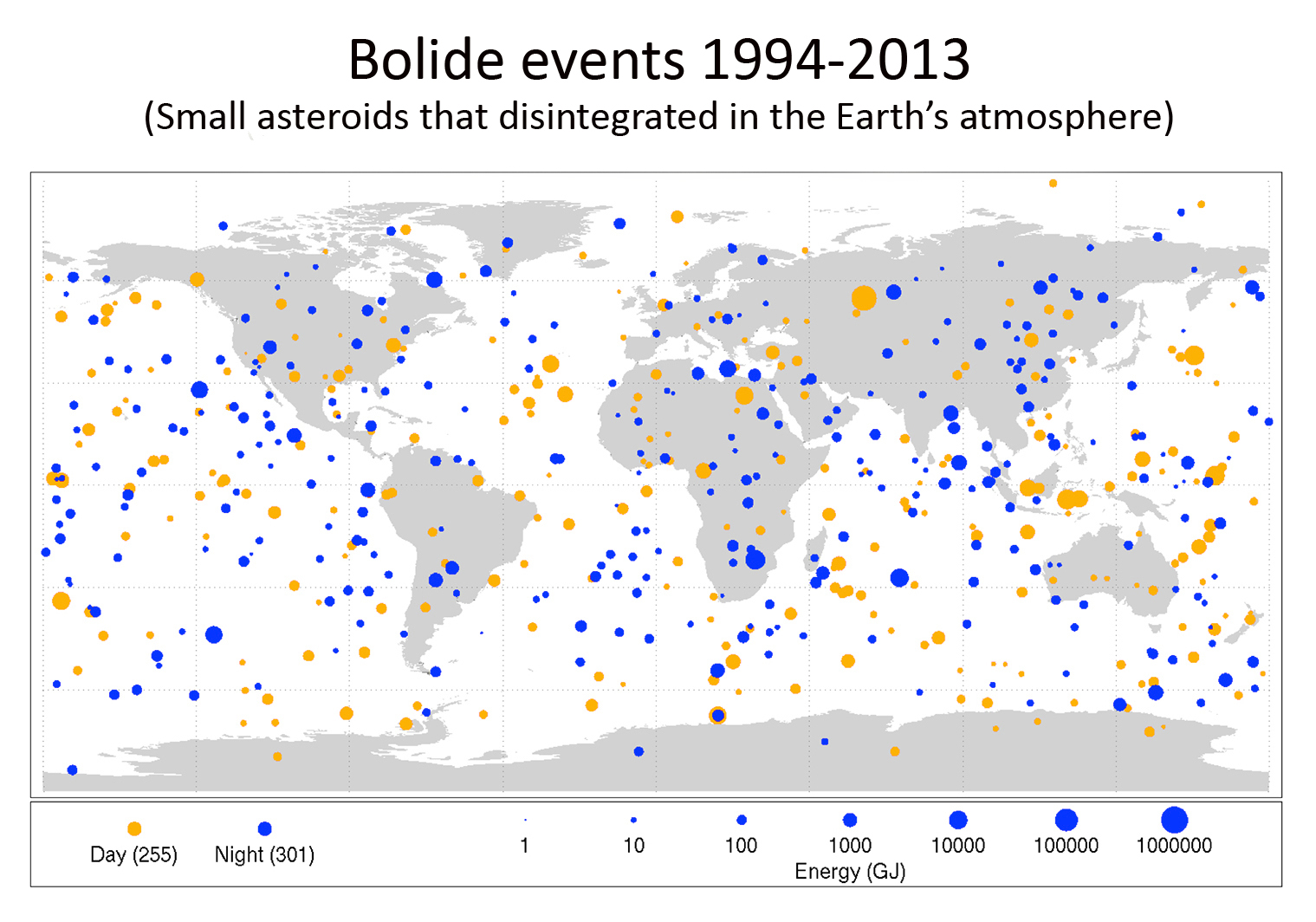 Note that Little Boy was a 63 TJ bomb dropped on Hiroshima, so 63,000 GJ which puts it as a smaller dot than the two biggest ones on the scale. These are the “Small Asteroid Impacts”…

Then, what’s “in the neighborhood’?

Here’s just the “potentially hazardous” ones (i.e. bigger than the ones in the prior map):

This is a very big chart and even if you click to embiggen it, the area around the Earth stays blue. There are so many you can’t make out the individual traces. Sit out at night and there are several named large meteor swarms that give twinkles of light as they burn up in the air. So would you say that looks like the Earth has “cleared the neibhborhood”

Here’s an animation of just the ones we know about so far:

Can you really look at that and say with a straight face that our neighborhood is cleared?

There have been a few major impact events, one as recently as 12,000 years ago, where major rocks from space have caused mass extinctions. From Dinosaurs to American Mega-fauna, we keep getting whacked with rocks from space. They have shaped life on this planet. Most recently, a fairly large one whacked Tunguska Russia in 1908 and wiped out a huge area with a blast roughly the same as Little Boy.

Our history is punctuated by comet and similar impacts changing the world.
https://craterhunter.wordpress.com/comets-and-the-bronze-age-collapse/

Comets and The Bronze Age Collapse
By Bob Kobres

Mirrored from The Cosmic Tusk. The original page is here.

. . . and from heaven a great star shall fall on the dread ocean and burn up the deep sea, with Babylon itself and the land of Italy, by reason of which many of the Hebrews perished,

. . . Be afraid, ye Indians and high-hearted Ethiopians: for when the fiery wheel of the ecliptic(?) . . . and Capricorn . . . and Taurus among the Twins encircles the mid-heaven, when the Virgin ascending and the Sun fastening the girdle round his forehead dominates the whole firmament; there shall be a great conflagration from the sky, falling on the earth;

Are these lines from Book V of the SIBYLLINE ORACLES eschatological nonsense? Contemporary astronomical evidence suggests a historic basis for words describing cosmic calamity. British astronomers, Victor Clube and Bill Napier, in THE COSMIC WINTER (1990) and other recent works, provide students of the past with newly discovered celestial clues which indicate that Earth has been periodically pelted with comet fragments throughout the Holocene period. The evidence for the break-up of a large (> 50 km), short period (approximately 3.3 years), Earth-orbit-crossing comet is substantial and should be considered as hard as anything a trowel might turn up. What astronomical information cannot convey is the actual effect these periodic bombardment episodes had on human culture; only further digging and sifting will illuminate that aspect.

There’s mounting evidence for a major impact even in the Younger Dryas. Just yesterday in geologic time scales.

“Scientists have found the first evidence that a devastating meteor impact in the Middle East might have triggered the mysterious collapse of civilisations more than 4,000 years ago. Studies of satellite images of southern Iraq have revealed a two-mile-wide circular depression which scientists say bears all the hallmarks of an impact crater. If confirmed, it would point to the Middle East being struck by a meteor with the violence equivalent to hundreds of nuclear bombs. Today’s crater lies on what would have been shallow sea 4,000 years ago, and any impact would have caused devastating fires and flooding. The catastrophic effect of these could explain the mystery of why so many early cultures went into sudden decline around 2300 BC.”
— Robert Matthews, The Sunday Telegraph, 4 November 2001

“Hundreds of years after the event, a cuneiform collection of “prodigies,” omen predictions of the collapse of Akkad, preserved the record that “many stars were falling from the sky” (Bjorkman 1973:106). Closer to the event, perhaps as early as 2100 BC, the author of the Curse of Akkad alluded to ‘flaming potsherds raining from the sky’ (Attinger 1984). Davis (1996) has reminded us of Clube and Napier’s impact theory, and asked “Where is the archaeological and geological evidence for the role of their ‘Taurid Demons’ in human history?” The abrupt climate change at 2200 BC, regardless of an improbable impact explanation, situates hemispheric and social collapse in a global, but ultimately cosmic, context.”
— Harvey Weiss, Late Third Millennium Abrupt Climate Change and Social Collapse in West Asia and Egypt, 1997, p. 720

Here Antonio Zamora reviews his paper in a video about the Carolina Bays and similar impact structures:

Then there’s that giant crater in Greenland:

Huge crater discovered in Greenland – here’s how the impact may have wiped out the mammoths
by Kathryn Harriss, The Conversation

Scientists have discovered a 31km wide impact crater beneath the Hiawatha glacier in Greenland. The discovery, published in Science Advances, was made using airborne radar surveys which unveiled a circular bedrock depression beneath the ice. The presence of quartz and other grains and features on the ground helped the team confirm the finding – these showed signs of having been subjected to large shock pressures.

Analysis of the grains also shows that the impact was most likely made by an iron meteorite more than 1km wide. It would have occurred during the Pleistocene, between about 12,000 and 3m years ago. This is by no means the only large impact crater on Earth, and research shows just how much such features can teach us about the history of our planet – including the evolution of life. So how could the Greenland impact have changed our planet?
[…]
There is evidence that three impacts are possibly related to mass extinction events, including the Cretaceous-Palegene events caused by Chicxulub. We also know that the majority of marine species and terrestrial vertebrates became extinct during the Permian Triassic event some 252m years ago, thought to be caused by the asteroid impact leaving behind the Wilkes Land Crater in Antarctica. Meanwhile, the Popigia impact in Siberia about 35m years ago is linked with the Eocene-Oligocene event, which wiped out many marine species.

All these impacts created craters a whopping 100km across or more (170km for Chicxulub), suggesting that the 31km crater in Greenland may not have been as devastating to the Earth. However, it would have drastically changed the local environment and reset the life race within that area.

If it is really true that the Greenland crater was created 12,000 years ago or more, it could explain a mysterious feature called the Younger Dryas event. This was a sudden and dramatic change in climate – a glacial period about 12,900 to 11,700 years ago, followed by gradual climatic warming. Previously, scientists believed that this event was caused by a meteor exploding before impact, which would also have caused changes to the local environment.

While we think 65 Million years ago was a Very Long Time, in the 4.5 Billion year lifetime of Earth, it is a very recent event. That was the mountain sized object that destroyed the Dinosaurs. I doubt they thought their neighborhood was “cleared”.

More recently, there’s an impact site in the Indian Ocean that is likely the event causing the Noah story as a tidal wave from it would run right up the Red Sea and Persian gulf.

Burckle crater is an undersea feature that is hypothesized to be an impact crater by the Holocene Impact Working Group. They considered that it likely was formed by a very large-scale and relatively recent (c. 3000–2800 BCE) meteorite impact event, possibly resulting from a comet. Burckle crater is estimated to be about 29 kilometres (18 mi) in diameter, about 25 times wider than Meteor Crater in Arizona. The Russian Academy of Sciences lists the crater as a potential impact crater.

It’s pretty clear we live in a shooting gallery of space rocks. We have NOT “cleared the neighborhood” and get extinction level impacts fairly frequently compared to the life of the planet. Even into historical times.

I’m sure someone will want to claim that the Taurids are somehow a special case of a comet breaking up in a new orbit, but isn’t that just what happens? Lots of “stuff” kicking about and we’re not able to keep it all out? I don’t remember anything in the planet definition that included “Except for recent junk” or “comet debris excepted”.

So, IMHO, the necessary conclusion is that under the “new” definition of planet that includes a requirement to have cleared the area of debris, and given the recent (geologically) episodes of extinction level impacts, of large non-extinction level events, the various craters all over (including Meteor Crater in Arizona formed just 50,000 years ago), the frequent air burst events such as Tunguska and the one just a few months back off the coast of Alaska: The Earth has not cleared the neighborhood.

Therefor, by their definition, the Earth is not a planet.

A technical managerial sort interested in things from Stonehenge to computer science. My present "hot buttons' are the mythology of Climate Change and ancient metrology; but things change...
View all posts by E.M.Smith →
This entry was posted in Science Bits and tagged Asteroid, Comet, Earth, Moon, Pluto Planet. Bookmark the permalink.

10 Responses to Is The Earth Not A Planet?