It IS Too Late – Not Possible To Replace Cars In Time

According to the Great Sages of our time, Occasional Cortex and Saint Greta of the Gargoyle, we have less than 12 years to stop using ALL oil products and use stuff like cars charged by the sun and wind, and if we don’t, it is too late and we’re all going to die.

Well, it IS too late. It simply can’t be done in 12 years.
May as well give it up and party for the next decade.

Yes, it is 2015 numbers. Yes, I’ll be comparing those to 2018 ability to produce. That’s OK as there are actually more cars in use now, so it’s even worse than we thought and worse than this comparison will show.

In 2018, more than 70 million cars and around 25 million commercial cars were produced worldwide. This figure translates into a decline of around one percent, compared with the previous year. China, Japan, and Germany were the largest producers of passenger vehicles in 2018.

Now for the added salt.

That’s ASSUMING we were making, selling and buying 100% Electric Vehicles TODAY. We are not. So we would need to change all those factories over to making eCars. That takes time and machinery changes. You don’t make electric motors on an automatic transmission assembly line. So to change a factory takes a year or three. Reaching a little further up stream, you would need to have the tooling manufacturers change THEIR operations to make the different tooling you need. You would also need a BUNCH of added mega-battery factories making batteries. That’s going to add at least 3 years, and likely closer to 5. But Wait, there’s more!

To make all that tooling and manufacture all those batteries and electric motors, you will need a massive increase in the production of Rare Earth Metals, Lithium, Cobalt, and a few other metals. That will require finding and developing new mines at a horrific rate. THEN buying the giant machinery that mines use to extract and refine ores, and build the mine and refining operations buildings and get electricity to the sites. Major machinery can take up to 5 years for a build. There are only a few places that can forge a gear for a house sized truck. They are all busy already. Add 4 to 5 more years for them to expand to meet the added demand.

What’s that all add up to? At least an added decade, probably closer to 2, as various other limits of run rate crop up. Some of this can be overlapped. IFF you had cash in hand, right now, for the mega-battery factory and signed guaranteed delivery contracts for the lithium and cobalt and such, you might get a mining and refining company to overlap their added capacity with your build of a battery factory. It typically takes a year or two to negotiate that kind of giant deal, though.

In any case, it would take at least 20 years, and likely closer to 30 (or more) to make this happen without destroying the economy wholesale.

Even then, you run headlong into the need to fill all those batteries. The total electric production is about 37.5 quads. This graph is critical to understanding the scope of change required and just why it is insane: 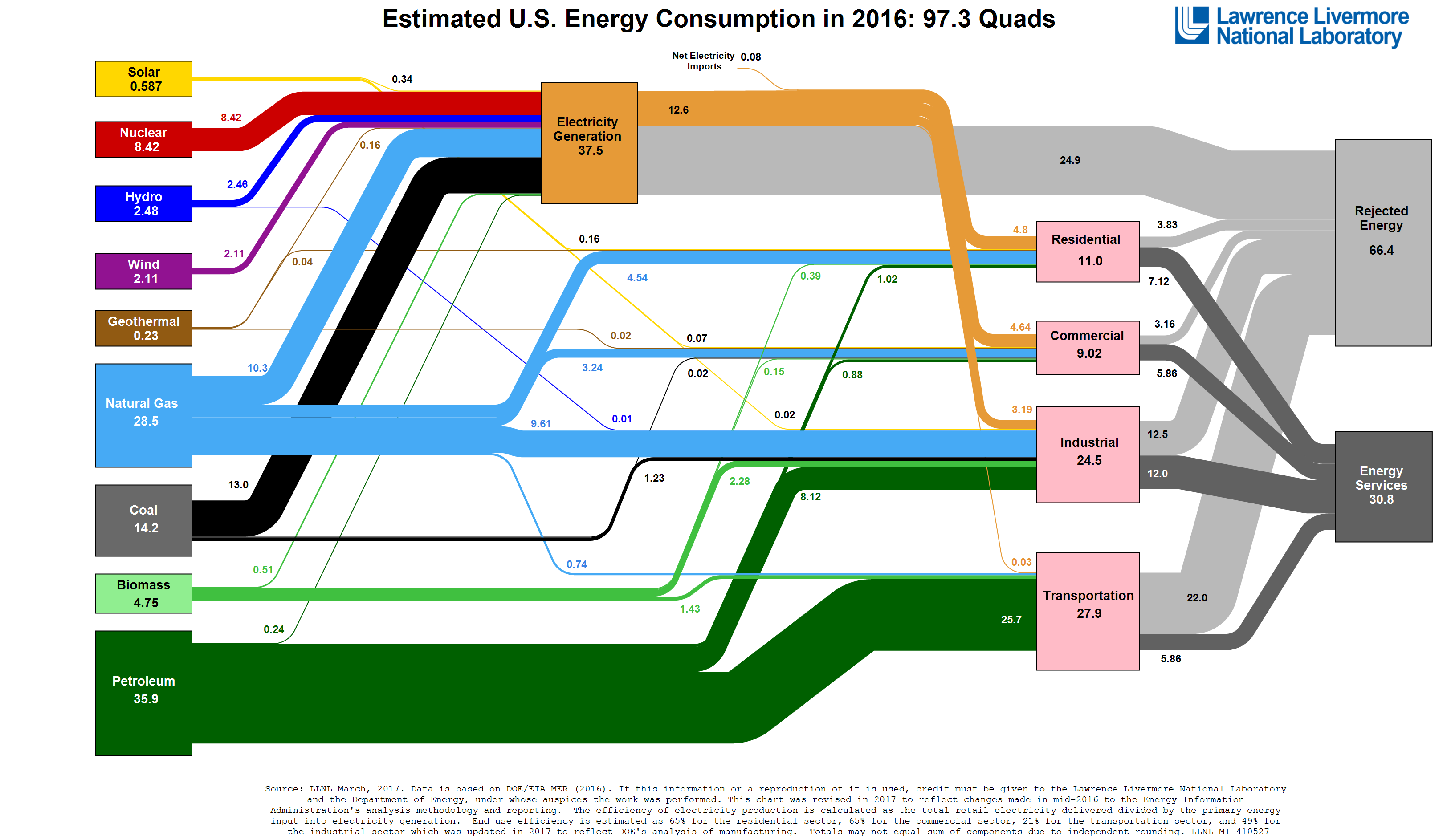 Notice the Petroleum block at the bottom. 35.9 Quads. (Click to embiggen if needed). That’s roughly the same size as ALL electrical production today. While “only” 25.7 Quads of that goes into transportation, the “goal” is to eliminate all of it. But it gets worse.

Look at the Electrical block at the top. That 37.5 quads has much of it coming from coal and natural gas. IF you just expand the present system, your eCars are just burning coal and natural gas instead of petroleum. Now you also want to convert that (roughly) 10 quads of industrial and house heating petroleum into electricity too.

Looking at the primary energy sources for electricity, we see there are 2.48 Quads (Quadrillion BTU) of Hydro. That’s not going to get any larger as all the good sites have been built. 8.42 Quads of Nuclear – forbidden by the Green Agenda and slated for reduction. Geothermal is a paltry 0.23 Quads and again the best sites are already in service, so only a little more nothing available. Gas is 28.5 Quads and Coal is 14.2 Quads. That’s 42.7 Quads that must be replaced with Solar and Wind, along with the added 35.9 Quads of Petroleum. A total of 78.6 Quads.

You would need to increase the number of windmills and solar panels by 29 times.

Everything that was built over the last 20 years, built 29 times over in under 10 years. Roughly a 60 Times increase in run rate of production. Again, we will run into the same logistical issues. From where will the resin for all those wind turbine blades come? The copper for the generators? The FACTORIES to make those solar panels and windmills? The trucks to haul the windmills (they are very special trucks). How many good wind sites are there? (Hint: Most of them are already built on).

In short, you can’t do it. Not in a decade. Not in 20 years. Not even in 40 years. You WILL be using Coal, Natural Gas, or Nuclear to charge all those eCars, even if you could build them in a decade.

I’ve been a professional project manager for about 25 years (more if you count my time as a data center manager and director of I.T. and Facilities). I do PERT and GANTT charts and work out logistics for a living. Lead times and dependencies are my natural element. The above estimates are exactly the kind of thing you do at the “talking up” stage of a project to see if it’s at all reasonable. To ask “Can this even be done?” before you stick a lot of resources onto it. Yes, you can “crash the schedule” a little once you do your charts and find the “Critical Path” items. But often there’s several major limiting items that just can not be expedited.

For our Cray and when we built out that computer room, one of THE biggest PITAs was the transformer. The electric companies don’t move fast. We needed 750 kVA for the Cray. There were 2 such transformers available in the whole country. We got one, and it was a dud on installation. Getting the second one required a lot of Special Attention. These are usually ordered a year or two in advance and custom built. To support all those eCars, you will need hundreds of these all over the country to support the charging stations. How many hundreds?

Near my home, a local shopping centre has installed Tesla chargers along one side of their parking lot. 18 stalls. Using the numbers for the lower power home charger, that would be 240 V x 80 Amp of service per stall. This is reasonable as these did not say “Super Charger” and even the Super Chargers drop to half rate it two folks plug in at once. Do the math: 240 x 80 = 19,200 VA. (Or roughly W but large power is quoted in VoltAmps or VA). Yes, I know the charger “only” draws 60 Amps, but the SERVICE is going to be sized at 80 so it doesn’t blow up on a hot day. Now x 18 for the stalls = 364 kVA. About 1/2 the size of our Cray Transformer.

For that size, you can likely find a dozen in the country at any one time, as a guess. When I saw the charge station it had 8 stall full (on 2 occasions). Once with 3 bored people sitting in their cars while they charged. The other with 7 bored people who I watched for about 1/2 an hour while the spouse shopped. Now figure it’s an hour to charge the Tesla, and figure it gets done about every 2nd day. Note I’m shifting to just the USA here, not the total world:

How many registered motor vehicles are there in the U.S.? Some 272.48 million vehicles were registered here in 2017. The figures include passenger cars, motorcycles, trucks, buses, and other vehicles.

Where will you get 1 Million transformers in, say, 5 years, when the current run rate is likely in the dozens? Where will you get the copper and steel and insulating oil for them all? The factory to make them in? The delivery trucks and cranes? All the new cables and towers to connect them to the substations? All the transformers at the substations to double their size? All the long distance towers to the new generation facilities? All in under a decade.

Just physically can not be done.

Note that home charging does not fix this. It just moves the need for the transformer to the local string of 18 houses.

So, since that means there’s no way in Hell to achieve the “decarbonizing” goal, that also means there’s no sense in trying. Party down for the next decade and don’t worry about it. You can’t “fix it” anyway.

Me? I’m happy to keep using gasoline and Diesel. It works fine. We already have the infrastructure. We have the oil. Besides that, the world is not warming and there is no “emergency” to fix. So I really don’t care that we can’t fix an imaginary problem with real world capacity.

A technical managerial sort interested in things from Stonehenge to computer science. My present "hot buttons' are the mythology of Climate Change and ancient metrology; but things change...
View all posts by E.M.Smith →
This entry was posted in Energy, Global Warming General and tagged AGW, eCar, Global Warming, Grid, Logistics. Bookmark the permalink.