Trangia Mini – A Caution And A Fire Story

I have a Trangia Mini Alcohol Stove that I love. I’ve had it for several years without incident.

I’m fairly certain this incident was entirely a result of the way I operated the stove, and it is unlikely to be something you would ever encounter in normal camping use.

That said, it is a “mode” that anyone using such a stove needs to be aware can exist.

This is a Trangia Mini: 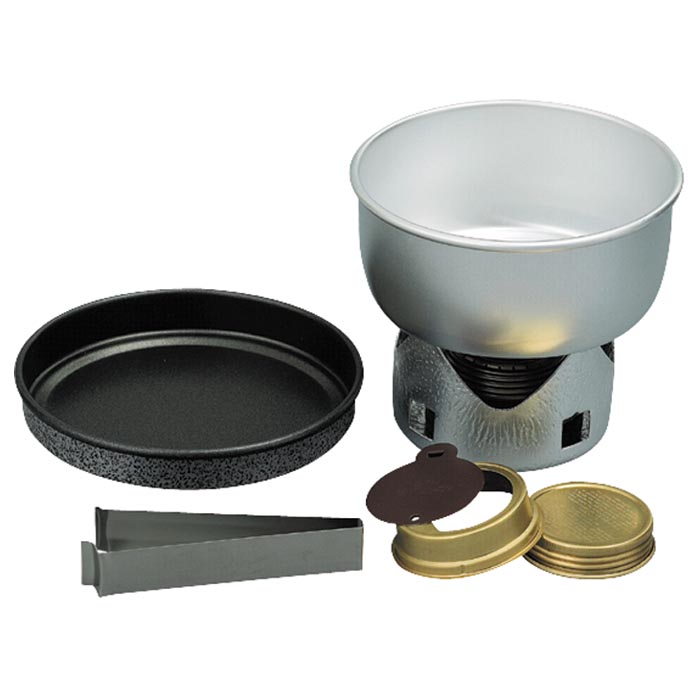 The “pot holder” is the scallop topped bit of aluminum under the pot on the right. Inside of it, you can barely see the alcohol burner. The brass lid and control ring are in front of that.

I’d noticed before that it starts slow, then “blooms” when the fuel is warm enough to pressurize the gas holes around the rim to make a more normal flame / burner effect. I’d also noticed that sometimes it seems to “bloom” again into a larger stronger flame. Rarely have I run it much longer than that, or if I did, I’d toss the control ring on it to keep from burning the stuff I was cooking or having the pot boil over.

Clearly over time, as the heat built up, the alcohol gets hotter and the “speed” of the stove increases until it limits on high. For this particular stove, this is helped along by the aluminum pot holder legs that end up IN the flame, and conduct heat to the body of the pot holder. This can result in a warm area under the stove.

To assure this didn’t hurt the table top, I’ve run it in a tin pie pan, or on top of a “lab book” without incident. I think this matters. This time I used a cork pad about the diameter of a pie tin and about 1/3 inch thick. Cork is a great insulator.

I had a 2 quart / 1.5 L (per the bottom of the pan, I know they are not the same) pot with a steamer basket in it and broccoli in the basket. The water level was to the bottom of the basket, about 1.5 inches. It started cold. This was set on an absolutely full near to the rim Trangia. I think this matters too.

I started it running while I went to get the rest of dinner underway, knowing it would take about 5 minutes for the water to reach a boil.

Time passes. The stove eventually “blooms”… then later “blooms” again to a size of flame the is starting to extend around the edges of the pot. I decide that, at about 8 minutes all told, maybe headed to 10, I need to put the control ring on the pot. So I’m inspecting the flame size and have the ring in hand, deciding on a setting…

POOF!!! The stove uber-‘Blooms’ again and spits alcohol into the pot holder and splatters some outside the pot holder onto the cork pad. I’ve now got a nice fire about 8 inches in diameter and a foot tall. The part on the cork is just small spatters, but the pot holder is now acting as stove with about 1 mm or maybe 2 of liquid in the bottom. I set the pot over on the other counter.

I’m not particularly excited at this point as:

a) I just don’t do that much any more. Jump out of an airplane a few times and everything else seems kind of tame.

b) It isn’t very big, there’s not much flammable near, and it has clearance to the ceiling. It is slowly diminishing anyway.

At this point, thinking maybe the part on the cork can just evaporate off and burn out, I notice the cork is charring under the wet spots. So that’s not going to work. They are down to about 3 inch flames and the center is still running about 8 inches and not slowing down much.

I just carefully pick the whole thing up by the rim and carry it to the sink, set it down, and run water on it. Problem goes away… Nice thing about alcohol, water puts it out.

I think this particular stove is balanced for a narrower range of ambient temperatures and heat loss context than my other larger one. Same burner, but a larger steel ring that holds the burner up off the surface. I’ve run it under similar conditions without issue.

Used in cooler air, or without a superb insulator under this pot holder / stove, I have not had any event like this happen. I think it expects cool dirt or a heavy wooden table under it for heat loss.

I’m fairly sure that running it for about 8 to 10 minutes, on full, with the top covered for a goodly radius by a pot, and the bottom very insulated, caused excess heat build up.

Had it NOT been filled “to the brim”, there likely would not have been enough alcohol left after 8 to 10 minutes to have a “spit up” happen.

Had I been less slothful about putting the burner control ring on, it would not have gotten to this state. Being interested in getting a LOT of water to boil fast, and then spending time marveling at how large the flame had gotten were not good decisions.

Next time I’m going back to the pie tin. a) The Splatter Spit did not extend beyond the rim of a pie tin. b) The pie tin conducts heat away. I’ve done a similar cook on a pie tin without issue. c) Pie tins do not burn at normal fire temperatures / conditions.

I need to buy a new cork hot pot pad.

Having a pint of water near the stove might have simplified things and saved the cork pad.

Be wary of running this stove a long time, full, in very hot weather. You have a control ring, monitor the flame size and use it.

Dinner was fine. Cork pad tossed on the damp lawn; I moved the (basically done) steamer to an electric hot plate, fried the fish over a propane burner, and microwaved the side vegetable. Didn’t really even break stride in the prep of dinner.

Maybe it is growing up as a restaurant brat. If you get a kitchen fire (say a pan of grease spits and catches) you don’t panic and shut the place down. Just deal with it quickly and don’t forget you are still cooking… Besides, you are surrounded by big gas burners all the time anyway. The Wolfe range we had had 6 burners about a foot diameter each (for the flaming bit!) and you could have all of them going at once. Fire, it’s part of the job.

I still love my Trangia Mini. I’m just going to marry it to a pie tin and respect its limits…

A technical managerial sort interested in things from Stonehenge to computer science. My present "hot buttons' are the mythology of Climate Change and ancient metrology; but things change...
View all posts by E.M.Smith →
This entry was posted in cooking, Emergency Preparation and Risks and tagged alcohol, Fire, Fix, Mini, Trangia. Bookmark the permalink.

22 Responses to Trangia Mini – A Caution And A Fire Story