Trump tweeted out the selected logo for the US Space Force. Various folks, including a lot of Star Trek fans, went nutty claiming it was a rip-off / copy and Were Not Happy. (Can anything make a TDS sufferer happy?) Not bothering to check history and certainly not figuring out that Trump himself had nothing to do with the creation of the logo, that it was the Force itself that chooses.

Well, when you dig into it, you find the logo is almost identical to the pre-existing US Air Force Space Command logo just made round. When you dig deeper, you find out that it, AND the Star Trek logo owe their design to leveraging the early NASA logo. In the case of Star Trek, by design and as an homage of sorts.

President Trump unveiled the new U.S. Space Force logo on Friday, and the Internet didn’t take kindly to it.

The design for the newly minted sixth branch of the military looked an awful lot like the Starfleet Command insignia from the Star Trek series and movies, depicting a delta and a globe encircled by a rocket and set against a backdrop of stars. Minutes after Trump tweeted out the image, a chorus of observers rushed in to ridicule the similarities.

It was an “obvious Star Trek knockoff,” one user wrote. “Boldly going where we’ve gone before,” quipped another. Even actor George Takei, who played Hikaru Sulu in the original series, joked that the franchise was “expecting some royalties from this. ”

But the new logo is really just a riff on the original U.S. Air Force Space Command emblem, which dates back decades. And among the people to point that out was Michael Okuda, a longtime Star Trek graphic designer who in the 1990s created the Starfleet Command logo for Paramount, which itself was derived from older designs.

“The arrowhead in the U.S. Space Force logo appears to be borrowed from the U.S. Air Force Space Command emblem, which has been in use since the 1980s,” Okuda, who has also designed emblems for NASA, wrote on Facebook.

“Arrowheads and swooshes and orbits and stars and planets have been used in space emblems long before either of these emblems,” he wrote. “For whatever it’s worth — and I do not own the intellectual property rights in most of my Star Trek work — I’m not offended by the similarities, nor would I accuse the Space Force of plagiarism. I’m just amused. It ain’t that serious.”

Indeed, neither Star Trek nor the U.S. government can claim pure originality when it comes to the design of their space emblems. If anything, they seem to have spent decades taking cues from each other.

The original “Star Trek” series, which debuted in 1966, appears to have drawn inspiration for the legendary Starfleet insignia worn by the show’s characters from early NASA emblems.

A 2018 post on the show’s official website noted that Star Trek creator Gene Roddenberry and producer Robert Justman based the insignia in part on NASA’s gold astronaut pins, which are awarded to astronauts who fly into space.

“The insignia worn on Starfleet uniforms is the equivalent of the badges worn by U.S. Service members — to show how they serve, not where they serve,” the post read, which noted that Roddenberry and Justman had served in World War II. “In the 1960s, the Starfleet delta had far more in common with the golden pin awarded to a NASA astronaut than a simple mission patch, and it was intended to equal that proud emblem in both use and sentiment.”

The NASA pins, first awarded in 1963, feature “a trio of trajectories merging in infinite space, capped by a bright shining star and encircled by an elliptical wreath denoting orbital flight,” as described by NASA at the time. A similar shooting star appears in the Starfleet insignia.

NASA’s original seal, rolled out in 1959, also contains some of the same design elements. The red delta-like shape in the agency’s famed “meatball” logo represented an air foil, surrounded by white stars and a white orbital path. In the fictional Star Trek universe, the Starfleet insignia is meant to be a “direct descendant” of the logo, according to the Star Trek website. 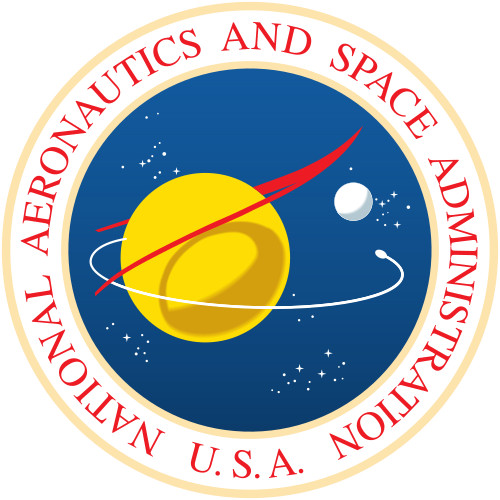 So it sure looks to me like Star Trek copied the US Military / NASA designs, and now there’s just a little overlap…

But for now, enjoy watching what TDS does to all those folks who just can’t be bothered enough to find out the Starfleet Logo was an homage to the existing USA Space Agencies and that maybe, just maybe, that’s OK. Don’t even try to tell them that the US Air Force Space Command logo was basically made round just like the NASA Seal… they might take off like a rocket… or a delta wing space craft going straight up into orbit with the stars. Hey, I bet that might make a good logo! ;-)

A technical managerial sort interested in things from Stonehenge to computer science. My present "hot buttons' are the mythology of Climate Change and ancient metrology; but things change...
View all posts by E.M.Smith →
This entry was posted in News Related and tagged Force, Logo, NASA, space, star, Trek. Bookmark the permalink.