The proper name is La Gloria Road. It’s a dirt road connecting highway 25 to interstate 101. It goes through the mountains next to The Pinnacles.

The Pinnacles is a mountain (well, really, half a mountain…) that sat on top of the San Andreas Fault. Over time, one half got moved way north relative to the other half. Now it’s an interesting collection of sharp breaks and cliffs and “pinnacles” where the mountain was torn in half, then eroded.

While folks were wondering where I was, I was assembling my camping gear, getting the “truck” ready, and generally preparing, then doing the drive to the Pinnacles, and back; along with visiting the camping grounds.

Pinnacles National Park is an American national park protecting a mountainous area located east of the Salinas Valley in Central California, about five miles (8.0 km) east of Soledad and 80 miles (130 km) southeast of San Jose. The park’s namesakes are the eroded leftovers of the western half of an extinct volcano that has moved 200 miles (320 km) from its original location on the San Andreas Fault, embedded in a portion of the California Pacific Coast Ranges. Pinnacles is managed by the National Park Service and the majority of the park is protected as wilderness.

The national park is divided by the rock formations into East and West Divisions, connected only by foot trails. The east side has shade and water, the west has high walls. The rock formations provide for spectacular pinnacles that attract rock climbers. The park features unusual talus caves that house at least 13 species of bats. Pinnacles is most often visited in spring or fall because of the intense heat during the summer. Park lands are prime habitat for prairie falcons, and are a release site for California condors that have been hatched in captivity.

I’d had several goals in mind. One was to just check out the status of all National Parks. Another was to buy a lifetime pass. It costs $80 for Seniors. Turns out it is only sold on line at present due to the Chinese Wuhan Covid virus. Oh Kay… (See: https://store.usgs.gov/senior-pass ) You can also get a one year Senior Pass for $20.

At this time, the entrance fee at The Pinnacles (and many / most / all?) National Parks is being waved, so didn’t need it (but will get one anyway, now that I’m home). They do get you a 50% discount on camping space costs. As my next To Florida Trip will be “camping all the way” and not “Sleep is for sissys”… I’m expecting to get my money’s worth out of a pass.

As the East Entrance, Bear Gulch Visitors Center and nice campground are on the back side of the park (East side), I took highway 25 south through Hollister (Brando biker movie fame… The Wild One) which is a nice drive from Santa Clara of about 1.5 to 2 hours depending on what you like doing on the way. When looking at this map, notice the road that goes just over the top. That is La Gloria Road. (More on that later…) Then look at the diagonal printing on the right side. San Andreas Rift Zone. You are right on top of the San Andreas Fault. (if you want a giant pdf map, click this) 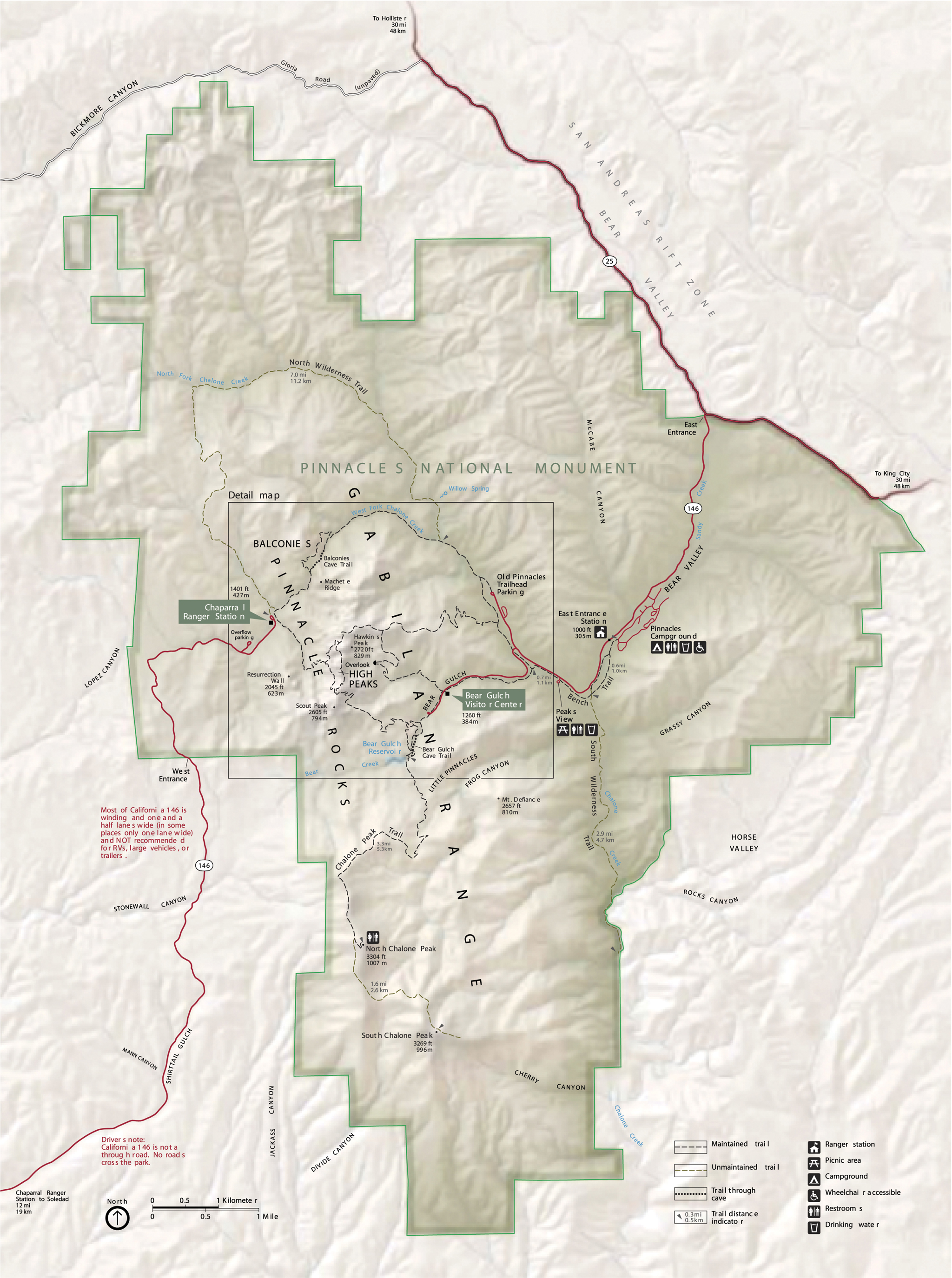 The road past the East Entrance Station up to the Bear Gulch Visitor’s Center is closed off. It is unclear if that is for maintenance or to prevent folks gathering in “crowds” at stopping points. So to go further is on foot or bike only.

FWIW, there was one raccoon out for a stroll on the road in the camp grounds (back area near number 70-something I think it was) who was nice enough to step to the side of the road to let me drive past, though he did give me a dirty look… ;-)

On the way in, I’d seen a road sign saying “Gonzales, 19 miles” that was about 4 miles short of the turn into the park (that is, itself, a 5 mile run from highway 25). It had a close-able gate with “CLOSED” on it it giant black letters on a white background, but was wired open… so probably not suited to driving when wet and all mud. This being the dry season, I figured “Might be fun”. So for the return trip, I took it.

This is La Gloria Road. It starts out with a mostly flattish and wide enough dirt section, cows and some grazing areas each side. It gradually rises to about 2500 feet elevation. Then you get suddenly shown how high up you are as it crosses into Monterey County. It then narrows and heads down 2500 feet in about 5 miles. Most places are about 1.5 cars wide, some only 1. The drop is fast and you have a sheer drop off on your passenger side (right).

I was very pleased with how the Subaru Forester did. The washboard bits (nearer the start) were a bit much until I lowered air pressure back to the recommended 29 psi. (I usually run tires very hard for better gas mileage). I’d likely have dropped to 20 (or even less) if conditions were worse.

On the very steep downhill parts, there was a little tendency to pick up speed. LOTS of brakes can lock up the front wheels of front wheel drive cars and then you slide off the cliff. Not enough brakes and you go too fast and slide off the cliff. In my old Honda, I’d use hand brake to slow via the rear wheels and a bit of gas (just a BIT) to torque steer around tight downhill corners on snow or slippy stuff. In the 4 wheel drive that didn’t really work as the motor just overpowered the rear brakes. Just using the rear brakes and staying off the gas in the corners, but adding foot brakes in the straight bits seemed to work best.

It wasn’t necessary to do that, just braking would likely be fine (if done judiciously) but I wanted to learn more about handling now instead of when needed in a panic moment ;-)

Here’s a nice video of the drive. It’s from a month ago, so about the same as now. By a motorcycle guy, so you get a little bit of lean at times, and a wave from the other motorcyclists ;-) The good thing is the sound is left quiet and natural. No music track of crap you don’t like. No narrative. Just the ride. The “interesting” bit starts at about 19 minutes in, past the cows and after the nicer more sedate bits of road. There’s the entering Monterey County sign and a squiggle of curves ahead sign. Then you are on a road where you can’t turn around, with tree tops off to your right (showing how steep the drop is).

It’s hard to get a sense of the downgrade, but at some points (about 22? minutes IIRC) you can see some road ahead to your right and below you, then realize it’s your road. You get most of the experience between 18 minutes and about 25 minutes, for those wanting a short form. At about 35 minutes you get the relief of a return to asphalt (near the Swiss Gun Club building behind the fence on your right). So about 15 minutes of Oh Dear! road. There’s also some nice views of the Salinas Valley from the top. The video doesn’t quite do them justice. (Then again, no video matches the reality of being on a mountainside looking 2500 feet down at a valley…)

After that, it was just about an hour and something of freeway back to the urban sprawl.

It was a great refresher to get away from the incredibly stupid Political Follies, the Globull Warming Scam, and all the rest. To be reminded what life is really about. To just be looking at, smelling, touching; trees, water, rocks, and having the odd wild critter inspecting your acceptability. Grounding. Literally.

I intend to do much more of this. In the last month of “cleaning up and sorting” preparatory to some home repairs and selling, I found 3 tents. I’d bought a new one each time the family got larger, so that “post quake” we’d just move into the yard. A 2 person Kelty (that they call a 3). A 3 person Coleman (that they call a 4). Then a 4 room “I don’t want to deal with this again” tent of about 200 square feet Kelty. Dividers to give 2 bedroom pods, a main area, and a “porch” where the dogs could stay ;-) (Or packs and dirty shoes). I have a Pup Tent “somewhere” from when I was single, unless it was tossed out from age and wear at some point, but some of the garage is still “to do”, so may yet surface.

Given all that kit, I figured might as well use it! So now three cars have a tent in the trunk, and two have a sleeping bag included. (Third bag didn’t survive storage and 4th went with a kid, I think…) Cooking & Lighting kits are packed for 2 cars, and the other ancillary bits are being sorted out of storage and into cars. I expect to use it on various road trips along with some “vacation days” of camping. We’ll see how that all goes over time.

I’ve done a test set-up and evaluation of each tent in the back yard. All of them are still in excellent condition (bags not so much, so spousal person sewed up a new bag for one and repaired the other). All parts present and all fabric in good condition. All zippers working.

So for those wondering why I was quiet recently, that’s why. Lots of yard time, then some campground and National Park time, then a Glory Road experience on the way home, then just laying on the bed thinking “why is this so comfortable… and what’s that part that is sore… and how do I ever get up again?” ;-)

A technical managerial sort interested in things from Stonehenge to computer science. My present "hot buttons' are the mythology of Climate Change and ancient metrology; but things change...
View all posts by E.M.Smith →
This entry was posted in Emergency Preparation and Risks, Favorites, Human Interest and tagged Camp, Gloria, Park, Pinnacles, Road. Bookmark the permalink.

10 Responses to Pinnacles, The Glory Road