A Nod To The Nodwell

I’ve watched a fair number of Winder Matt’s Offroad Recovery videos. Partly to see what kind of stuff folks did wrong that got themselves stuck. Partly to figure out what Matt does that lets him just drive circles around stuck folks and pull giant RVs out of the muck with a Jeep.

There’s also “another guy” that popped up. “Casey’s Offroad Recovery”. He was pulling folks out of OMG stuff using “Noddy”, a WT? IS that thing? The proper name of them is a “Nodwell”. I had no idea…

It is kind of like an industrial sized Snow Cat that uses tires to drive a sort of U in the treads. His is a Nodwell 110. There’s also what looks like a smaller Nodwell 60. Comes in Diesel or Gas or whatever… (looks like engine of the day is an option…) This one is a water truck for fire fighting: 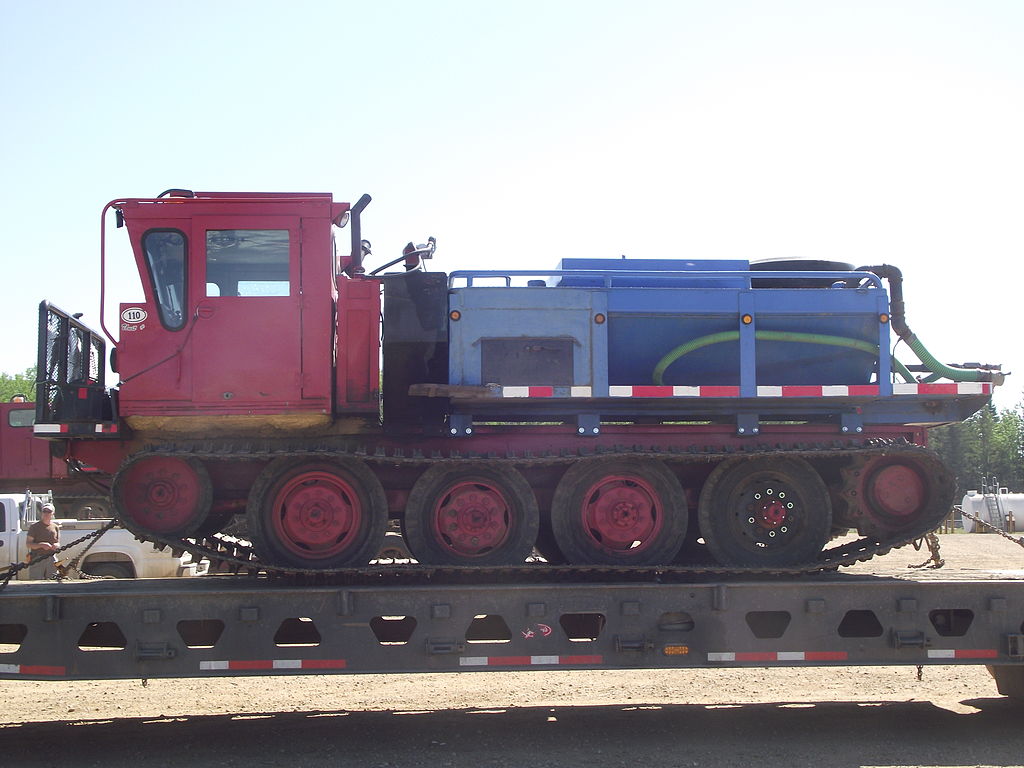 It also is designed for swamps, shallow rivers, muskeg, mud, sand and just about any other impassible terrain. Here a Cadillac Driver decided to swim up river and found out river bottoms have holes in them… (Maybe if he spent more time fishing he’d know about looking for holes in the river bottom where the big fish like to settle in…) But really, a Cadillac? Something about a LOT of money causes folks to think reality doesn’t apply to them quite as much. A whole lot of the “Stuff stuck where you ought not go” tends to be the luxury end of the 4 x 4 market. Old Jeeps not so much…

He also does the usual Jeep XJ like thing with a rubber rope “tug and go” stuff. Just another Buba J. who has a whole lot of clue about something guys with more money than brains find out they need. ;-)

But back at the Nodwell:

Little did I know. Made by a Canadian to gain access to all sorts of places in Canada that you just can’t go otherwise. From muck to frozen, it goes.

They even have a users group and a used online market. A “Water Truck” version for $12K on up to fancy ones in the $40k range. It would cost me more for the land to park it on, the trailer to haul it, and the Dodge Diesel to tow the trailer…

So who came up with this idea? Why, Mr. Nodwell, of course!

Bruce Nodwell, OC (May 12, 1914 – January 20, 2006) was a Canadian inventor who invented the Nodwell 110, a multi-purpose two-tracked vehicle capable of traversing a wide variety of adverse terrain, including sand, mud, muskeg, swamp, and snow.

In 1970, he was made an Officer of the Order of Canada, Canada’s highest civilian honor, “for his contribution to the opening of the Canadian North through his inventions and development of various types of tracked vehicles”. A mountain in Antarctica “Nodwell Peaks” and a lake in NWT bear his name.

The lake is named that due to one sinking in it…

A large lake in Canada’s North West Territories is called Nodwell Lake (Lat 67.4539, Long -135.3115). During the early days of geophysical exploration in the north, the Nodwell vehicles were often sent out onto lakes once the ice was believed to be strong enough. The tracks in the snow would speed further freezing for other equipment. A Nodwell 110 fell through the ice of this lake and from then on it was known as Nodwell Lake. The crew was able to quickly exit out of the “Escape Hatch” on the roof that was standard equipment.

Nothing like a Factory Standard Escape Hatch to tell you it’s the right off road vehicle for those particularly touchy jobs ;-)

Need one? Or just can’t help yourself?

Or maybe something fancier with an arm and dumping and stuff for folks in Europe:

Just in case you need something with Antarctic Experience so you know it can “go there” ;-)

Or maybe you get yours delivered to you in Fairbanks, ready to run up to Nome, and you have some questions. Well, just get in touch with the Users Forum:

Take your moose hunt to the next level! The Alaska Moose Hunting Guidebook is now available for Apple devices and for Amazon Kindle. This 360-page book is a great resource for any Alaska moose hunter, regardless of experience level. Purchase and Download for $19.99 at the following links: Apple Devices: Kindle Devices: (PayPal and Credit cards accepted.)

Nothing like taking your Nodwell on a Moose Hunt to let you know you have become a True Alaskan!

It’s like a whole ‘nother world… and I want one. Sigh.

A technical managerial sort interested in things from Stonehenge to computer science. My present "hot buttons' are the mythology of Climate Change and ancient metrology; but things change...
View all posts by E.M.Smith →
This entry was posted in Emergency Preparation and Risks, Favorites, History, Human Interest. Bookmark the permalink.

9 Responses to A Nod To The Nodwell