How To Respond To Narrative Merchants

I have a GAB account that I set up a year+ ago, but I’ve not used it hardly at all (and now I’m not sure what my password is…). Still, I get email from time to time from the Administration.

In my mailbox today was a letter to The Washington Post about an article the Post are preparing (so expect to see that article being pushed “soon”…). The “request for comment” hints at the article being a bit of a hit piece about dropping usage of Alt-Tech sites.

Gab is having none of it.

IMHO, this is exactly how to respond to the Narrative Merchants peddling The Swamp Narrative for lucre. State clearly what they are really doing and the perception of their motivation, call it out for what it is, and put it right back in their face where they are wrong. No quarter. No “artifices of polite society”.

The Left has clearly declared an all out Political War on anything conservative. Using rampant Asymmetrical Lawfare, Book Burning (digital and otherwise), Shunning, Silencing, Canceling, Fabricated False Framing and Narrative, Riots (aka “Mostly Peaceful Protests” that just incidentally involve looting and burning cities), Persecution via Prosecution, ballot box stuffing, vote count changing, and flat out election stealing (and more). It is no longer reasonable (nor even sane, really) to be polite about it. Speak the truth even if the truth is crude. It is what it is, do not deny it nor sugar coat it. (You don’t need to be excessively crass about it either, just be a normal person with normal levels of annoyance. There is a gap between “insulting and rude” and “polite to excess”, that is neutral and true.).

Call the turd a turd when you step in it, then hose it off and down the drain.

The email has a link to the letter in posting form here:

I’m going to quote it, but hit the link to give them a click anyway:

This afternoon I received an email from the Washington Post. I’m going to publish it here and share my response in full.

We’re working on a story about how pro-Trump and conservative commentators, influencers and content creators have seen their audiences change on Gab, Gettr, Rumble and Telegram over the last year. We analyzed the data for 47 accounts on those sites and found that, for the most part, everyone saw a big jump in followers or subscribers when Trump was banned from the mainstream sites after Jan. 6; the accounts’ follower growth dramatically stalled and plateaued over the rest of the year; and the few big follower jumps we’ve seen in recent months have mostly come as a response to the bans of high-profile conservatives like Rep. Marjorie Taylor Greene on Twitter and Facebook.

The sites themselves do appear to be growing, but some of the more prominent pro-Trump figures were analyzed have seen their growth rates become very slow or even decline.

For Gab specifically, Alex Jones, who joined in 2016, went from gaining roughly 25,000 followers a month in the first quarter of 2021 to about 1,000 followers a month for the rest of the year, the data show. The Gab follower counts for some prominent QAnon promoters have also grown by 1 percent or less per month since last spring.

Have you seen that trend? What do you think explains it?

Does this call into question the ability of alt-tech sites to be able to build an audience or a business long-term – and if not, why?

Some experts told us that these platforms focused on conservative politics are naturally limited in their appeal. There’s also a good amount of competition among them, and they’re in conflict with some giant, years-old platforms where many users already have established accounts and relationships. Any thoughts on those arguments?

I’m also planning to include your comments about Gettr (“The Regime is in panic mode. So out comes Grifter to distract the masses.”). Anything you can elaborate on? Why do you think Gettr is a grift, and is the same true about “TRUTH Social”? I know you’ve spoken about this elsewhere, but I’d appreciate anything you can tell me here or link me to.

Any other responses or context we should note?

Thanks for any information you can share, and please let us know if you’d have a moment to talk. Our deadline is tomorrow at 12 p.m. EST.

100% of our explosive growth is being propelled by the unforced errors of Silicon Valley. Tens of millions of people are visiting Gab every month because Gab is the one place on the internet where the free flow of information exists beyond the control of the Regime. Gab is the one and only platform to not bend the knee to the mainstream media, Apple and Google App Stores, banks, payment processors, Congress, and even the entire nation state of Germany.

Outlets like yours rightfully view Gab as a threat to your business because of this, and you should. In November 2021 the Washington Post had 116 million visits according to Similarweb. Gab had 70 million. This month we are on pace to have 90m+ visits and with election season in full swing we don’t see our growth slowing down anytime soon 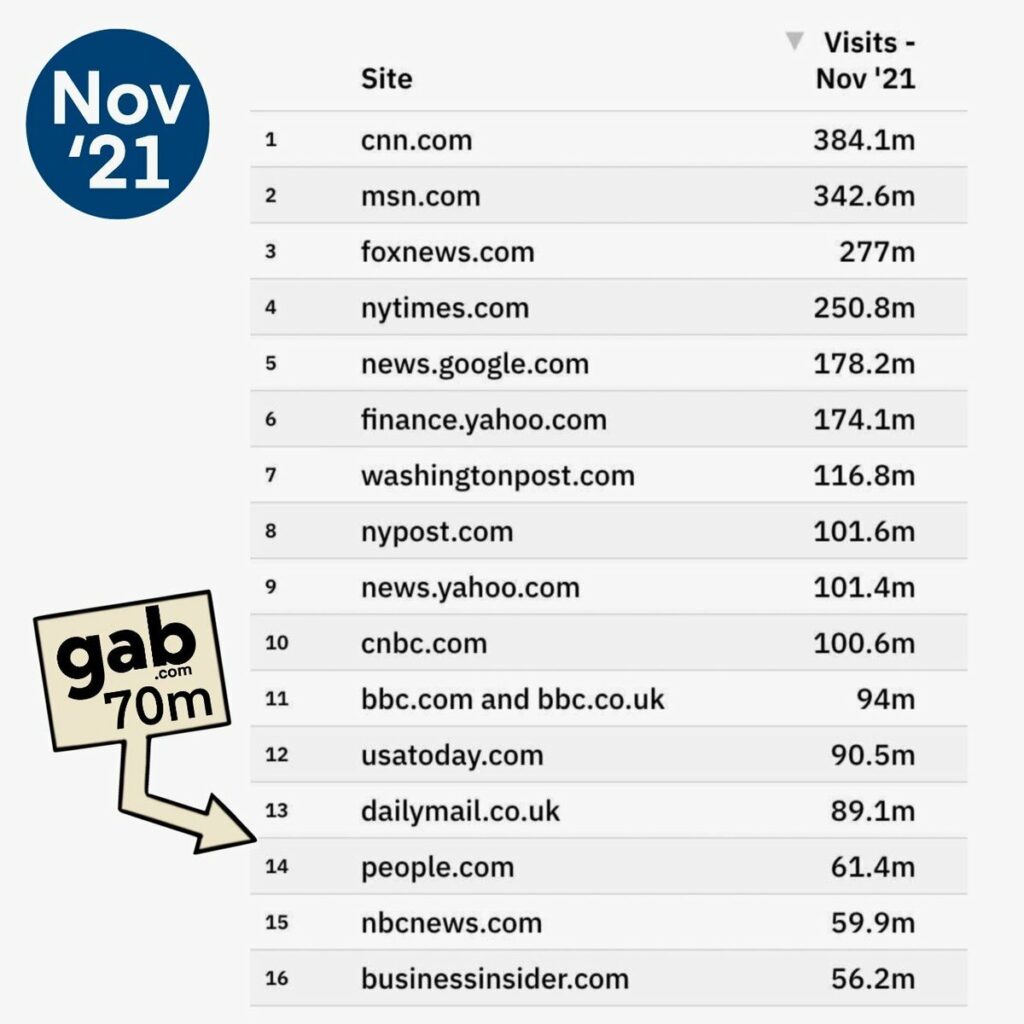 I can and will send my response to you out with one click right now and get more traffic than your article will before it is even published.

Your outlet is 144 years old. I founded Gab 5 years ago and run it from my basement in the middle of the woods.

Gab now has well over 50 candidates in the 2022 election using the platform along with multiple members of Congress and the biggest dissident voices on the internet all in one spot. We have medical doctors, nurses, and hundreds of thousands of people who do not support nor want to inject themselves with an experimental vaccine joining our platform. These people are from all different political backgrounds, beliefs, and creeds.

The growth and engagement of one small subset of 47 commentators is irrelevant to Gab’s growth overall as a free speech platform for all people. If you want my personal opinion as to why pro-Trump commentators aren’t growing as fast on alt-tech platforms it’s really very simple. President Trump has turned into a vaccine salesman which is a total and complete disconnect with the overwhelming vast majority of his voting base. I say this as someone who voted for him twice.

His non-stop vaccine shilling has turned many of his supporters off completely. You can see this plainly in the comment section of the statements that are published to his reserved Gab account. As a Regime propaganda outlet I understand that you are trying to craft a narrative that alt-tech is shrinking and doomed because pro-Trump commentators are shrinking, but the numbers and reality show a much different situation here.

People aren’t and never were coming to Gab for an online Trump rally.

People are coming to Gab for the Truth and to speak freely.

You can read more of my thoughts on Gettr and Rumble here:

The original has some more links in it.

I think maybe I need to figure out my password again ;-)

FWIW, my take on growth is pretty simple: People move when they are pushed out of one site, or someone they want to engage with moves to another site. That happens in waves.

The Censorship started with the biggest names, and moved their large audiences in one cohort. Now that they have moved, they are only going to have organic growth “going forward”. As more lesser names are banned and censored, their audiences will move with them in modest sized waves.

Eventually the “center of mass” will have moved to Alt-Tech, and then the growth will slow as it is just the “late to the party” folks who will be left to move over. Then, IMHO, comes the real fun:

At that point, the political center of the Censorship Sites will be middle left to hard left. THEY will find “centrists” anathema, and start banning them. They, too, will move to Alt-Tech. Repeat until the Censorship Sites are Hard Radical Left Sewers of insult, fear, and abuse. Then they die a slow death unless their Masters can figure out how to fix that death spiral. (CNN has lost 91% of their audience after the lies and arrests of 2021 but is yet to learn…)

In the meantime, the Middle Of The Bird folks (like me, neither left nor right wing but Libertarian for all your freedoms both ways) will find themselves vilified on the Legacy Tech and welcomed on Alt-Tech and will move. Frankly, a lot of that is already happening. A modest left semi-hippy type like Tim Pool is being chased out, go figure…

That won’t stop $Billionaires from buying media properties (like Bezos / Wash Post) and running them into the ground. Confusing the ability to discover a good money making racket once, with skill at communications…

A technical managerial sort interested in things from Stonehenge to computer science. My present "hot buttons' are the mythology of Climate Change and ancient metrology; but things change...
View all posts by E.M.Smith →
This entry was posted in News Related, Political Current Events, Tech Bits. Bookmark the permalink.

1 Response to How To Respond To Narrative Merchants