Edible Milkweed Pod? On My Fence

There’s this odd vine on one of my fences. It makes a light pod that feels almost hollow, but doesn’t sound fully hollow when you tap it. Any disturbance at the vine join point causes a lot of milky latex sap to come out. I’d figured, due to the latex, it was likely toxic. As I planned edible vines on that fence, I sprayed it with glyphosate last week (which kills off the roots, but isn’t a systemic “kill all the cells” poison – the tops die off due to lack of functioning roots). This means any seed pods are likely still viable.

2 Days ago I spent a while looking through “Florida Vines” and “Florida Toxic Vines” hoping to identify it, but didn’t get anywhere.

So this morning I’m on my first Cup Of Coffee, waiting for the brain to sputter to higher function… when I often watch pointless videos about things like making strange bread or cooking some strange food in another land… and here was a guy cooking and eating what sounded like my latex pod plant. BUT, the pod looked funny. Mine are more just roundish. Yet when I looked up the Latin name he gave, I found a page with pods that look just like mine.

EATING CLIMBING MILKWEED
Edible Milkweed Pod, GONOLOBUS EDULIS Especially now during the dry season when many trees are leafless often you see asymmetrically ovate fruits the size of grapefruits dangling from slender, dried- up, leafless vine stems tangled in the outer branches of trees ten or fifteen feet off the ground. One is shown at the right. In a few weeks these pods will open and release into the wind dozens of flat, lentil-size seeds equipped with fuzzy, white parachutes.

* UPDATE: Later I find that this looks like GONOLOBUS EDULIS, native to Costa Rica, Panama and possibly Nicaragua. However, online I find herbarium specimens collected in other countries, including Mexico (Francisco de la Cruz #1105, Álamo Temapache, Veracruz). Maybe this edible species has been spread by cultivation? Taxonomy of Gonolobus is an awful mess.If you’re familiar with milkweed pods you can visualize the whole process because the pods I’m talking about are produced by members of the Milkweed Family. I call the vines Climbing Milkweeds for lack of a better name.*

His pods look like mine, not like the ones in the video. Is that an age of plant thing, or a local variation thing, or maybe a climate influence? Or even a slightly different variety? Are mine just not quite ripe yet? Don’t know.

I’m now likely to take one of those pods and cut it open, see if the insides match the outsides. But despite my interest in native wild edibles, I’m pretty sure this one will get a pass. Just not keen on things with latex in them, or where some varieties of a family are toxic but some bits might not kill you if done just right… 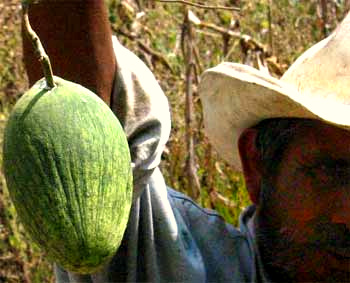 .
In this video, he shows preparation and describes flavor. (Spoiler Alert: There isn’t any flavor.)

The other vine on my fence makes little black berries that are supposedly also edible, at least to deer and such, but not enough to be of interest (especially as they, too, are semi-tasteless). I did find it in my search of Florida Vines.

So basically I’ve most likely got two wild weedy edible vines on my fence, neither one of which is of much culinary interest. So replacing them with something a bit more edible is fine with me. Even if I would have like to save some seeds from them prior to nuking them had I known their true utility. Or maybe not… I’d really rather have some sweet potato vines on the fence, or runner beans…

A technical managerial sort interested in things from Stonehenge to computer science. My present "hot buttons' are the mythology of Climate Change and ancient metrology; but things change...
View all posts by E.M.Smith →
This entry was posted in Emergency Preparation and Risks, Food. Bookmark the permalink.

16 Responses to Edible Milkweed Pod? On My Fence