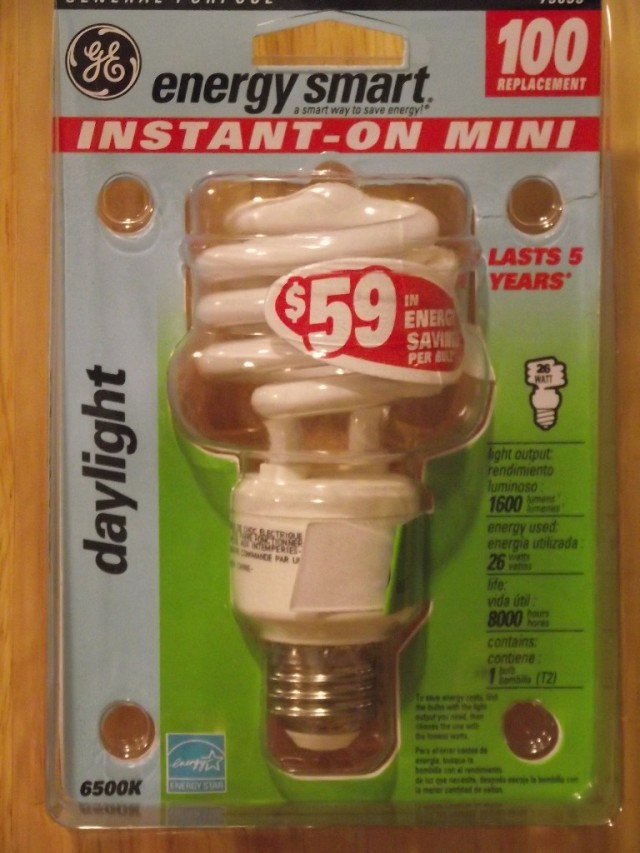 This is the “dead bulb” back in its original packaging that I’d not yet managed to throw out… planning to take some notes from it for a 5 year longevity / plant growth test.

About 3 or 4 months ago I was deep into “bulb research”. ( Or, more accurately, “bulb focus“… as it’s just what I do… focus then worry something to the limit…) so I’m not sure if it was about January, when I posted this:

or when I was writing this:

Where, BTW, one of the bulbs on a dimmer has already failed, so that halogen “good bulb” that claims to be dimmable may have some durability issues… so I’m running another one and we’ll see… it may be that it doesn’t handle dimming as well as they advertize…

But in any case, along the way, I bought a “Daylight Compact Fluorescent” from GE. Why? well….

That “Aspe Thing”… you need “completion” and you need “to just KNOW”… and the wrapper said “6500K” as the color temperature and I just couldn’t believe it. Most “Daylight” bulbs are about 5000 K if you are lucky. This one claimed a real daylight color temperature of about what it really is (on a cloudy northern day, not in the tropics…) So I bought it.

I had NO need for it. No real use. Just “need to complete”… Tried it. Yes, as advertized, a very “blue” light.

Now what to do with it….

So I put it over a ‘sprouting tray’ that sits by my desk. During warm times, it sits outdoors. Now, things being colder and me wanting faster results, I’ve got it indoors. I start seeds in “potting soil” in the 6-pack things from the nursery or in the 1-pint pots some other things come in from the nursery. Yes, I reuse them… “Reduce, Reuse, Recycle”… besides, I’m a cheap SOB and I’ve always reused things… They sit in the bottom of a ‘cat litter tray’ that is being ‘reused’ as a water catcher… about 1 meter from the light.

So I put this bulb in, it being closer to “daylight” ought to be a feature and all, and turn it on. It runs about 12 hours a day (max about 16) every day. Once on, once off, per day.

So, a few days later, I’m declaring this a ‘dead puppy’. Another Fine GE Product that Fails To Perform. Like their Windmills and, presently, their nuclear reactors in Japan (though in fairness, they only failed AFTER an out of spec event that was about 8 x spec… so kudos for that…) and of course, failures like MSNBC and that whole Leno / Conan fiasco.

But hey, grease the right parts of The Obama Machine and they can rake in some more Socialist Subsidy / Mandate cash, so what’s the problem?…

The bulb claims an 8000 hour life. Well, the competition is up at about 12,000 hours, so I was already expecting a bit less “bang for the bucks”. This is a “made in China” bulb too, and from what I’ve experienced, you get about a 1 in 5 “infant mortality rate” with them anyway. Why should GE be any different. It’s not like they have a reputation to care about or anything. They are just another Chinese Curly Bulb remarketer hawking product.

This bulb is the “100 W” replacement model FLE26HT2/6H/D that takes 26 Watts (a bit high compared to the competition) and puts out 1600 lumens (a bit low compared to some). But it’s a “daylight” type, so I ‘cut it some slack’. It only cost me something like 7 x the price of the PG&E (my local electricity company) Subsidy bulbs… I bought a batch of “Lights of America” at Walmart for 97 CENTS each on subsidy. They are also 1600 lumens, but only 23 Watts and with a 10,000 hour life. Oddly, I’ve not had an infant mortality problem with them. Then again, I’ve not used that many. Put in a couple and not needed to replace them yet… A Philips real 100 W incandescent says “1650 lumens” so they are not THAT far off…

At any rate, the bulb is a horrid color for indoors use (though the “Walking Cane Kale” seemed to like it ;-) and failed way too early, while costing too much.

FWIW, the “fixture” is a very shallow reflector aluminum ‘clip on’ lamp that has 4 holes up near the base to let hot air convect out. Each looks to me like about 1.5 cm diameter (womans little finger?) so heat build up ought not to ‘cook the lamp’. I’ve also run other lamps in it for long periods without issue… I can hold the aluminum without discomfort (though touching the ballast of the replacement bulb is a bit too hot for comfort..) IMHO, the “problem” is likely that the GE electronic ballast is too sensitive to heat build up and even minor ‘low ventilation’ rates make it die. Other folks, with more sturdy electronics in the base, do better; and these bulbs in open fixtures like table lamps will likely do better too. A decent silicon semiconductor ought to be fine at even 200 C, and these are way below that, so I’d suspect the “cheap bits” were in the capacitors… but who knows… “It’s Dead Jim”…

So I learned what I wanted from it. Didn’t really like the color temp at all, and mostly just wanted to “Use it up” and move on. So now it’s time to ‘move on’…

But I’d not bother buying GE CFL bulbs if you can get other folks stuff. It’s all cheap Made In China anyway, so don’t bother to “pay up for the name” as the “Name” is not buying you anything in my experience. At least with GE.

A technical managerial sort interested in things from Stonehenge to computer science. My present "hot buttons' are the mythology of Climate Change and ancient metrology; but things change...
View all posts by E.M.Smith →
This entry was posted in Economics - Trading - and Money. Bookmark the permalink.

21 Responses to GE Failure To Perform