Gonzo Gonzalo and Cyclone Up, Vortex Down

I was exploring the fascinating visuals at nullschool.   Being the sort I am, I looked at, and saved, a full series of each hP step (roughly millibars) from surface, to 1000, to 850, then 700 and 500 and 250 and 70 and 10…  for each of temperature, wind speed, relative humidity, and currents in the ocean with temperatures and on…

You can see it here live:

Now I’d started because I wanted to see what a Hurricane looked like.  Especially how the winds around it sucked up all the surface heat.    You can see Gonzalo off to the lower right, about over Bermuda. 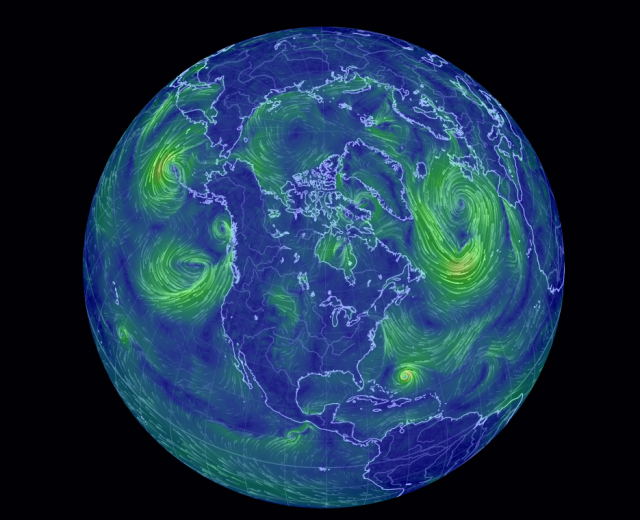 So that’s what I set out to do.  Look at the little wound up spot off the coast of Florida.   But what I noticed was those three much larger low pressure rotation zones up near the North edge of the oceans.    While rotating slower (so not in the news as a hurricane), they are sucking up way more total mass of air, and cooling far more ocean surface.    Also (it is easier to see in the live animation than this static picture, but look for the fatter ends on the wind lines to show direction of rotation):  The N. Polar vortex is visible in the middle of it all, rotating the other way.  (That matters… as it indicates heat up / cold down and out)

Now a polar vortex has descending cold air, thinks I…  and cyclones have rising hot air.   In between?   Wait a minute, I think:   We’ve got cyclones up and vortex down.   It’s a giant heat engine sucking the heat out of the surface, dumping it up high, and then shoving the frigid air back down again.  (Yes, it compression heats on the way back down, but only to about -15 C which nullshool shows you if you click on a spot on the surface in an animation).   So it can be -50 C or so at altitude, and heats up to damn cold at the surface.

Similarly, those surface cyclones are whipping up the ocean surface, mixing cold water to the surface, evaporating tons of water, lofting it to altitude where it condenses (and freezes) and falls as cold rain, hail, and snow.   Moving massive amounts of heat to above the troposphere.  You can even see the cold polar air mass drifting down over Canada and the USA bringing us a nice cold winter… in fall…

Note that nowhere in this story is radiative physics involved in the troposphere.  The only place IR radiation is doing anything at all is in the stratosphere.  And there, CO2 is a cooling agent, radiating heat to space.

That, in a nutshell, is the problem with the AGW Global Warming theory.  It ignores all those giant cyclones, polar vortex, clouds, rain, snow, hail, ocean surface churning and cold water mixing.   All the dynamic ‘hard bits’ are ignored in favor of a ‘one size fits all’ infrared model.   So how much infrared warms you in a snow storm?  A hail storm?  During a downpour of rain?  At the pole with a frozen stratospheric funnel draining onto your head?   It just is not in the picture.

Speaking of which, some more pictures: 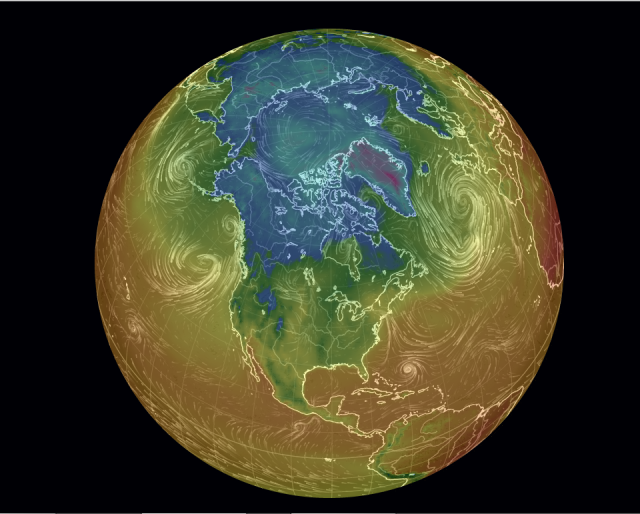 What fascinated me about this one was that Gonzalo did not show much surface cooling.  We know it happens by a degree or two, but not visible in this data.   Yet those larger cyclones are sitting right at the hot / cold interface and moving mass back and forth between them.  Picking up heat on the hot side, dumping it on the cold side.  (If you look at altitude slices, you can see the loft / descent happening too). 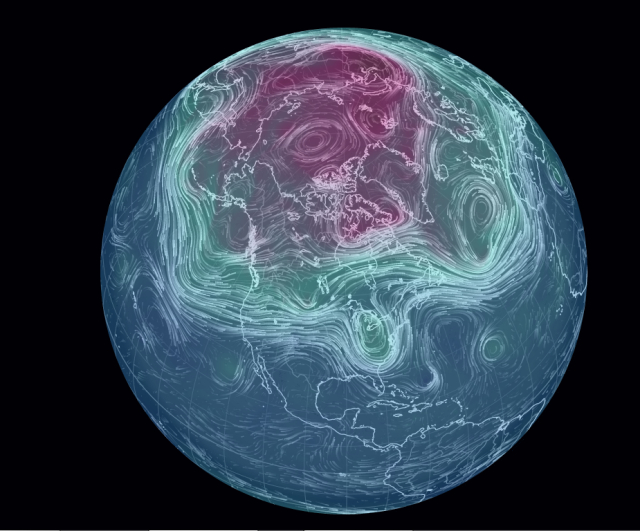 Half way up the atmosphere, things are colder, but the structure remains.  Cyclones up, vortex down, and warmer to colder bridging by those cyclones.   Gonzalo now barely shows up a at all.  As big as hurricanes are, they are small fry compared to major lows.

Gonzalo temps and the Stratosphere at 70 hP

By the time we are at 70 hP (or mb) we are well into the stratosphere.  At this level, it is all cold polar vortex.   The intermediate layers (worth looking at, but a bit much to put in one posting) show the transition, and some of the changing directions and flow).   So here we have all the lofted air, radiating like mad to space, becoming incredibly cold, then going down the plug hole to the pole.    Notice that you can’t see the surface artifacts at all ( no cyclones, no surface IR making hot spots…) 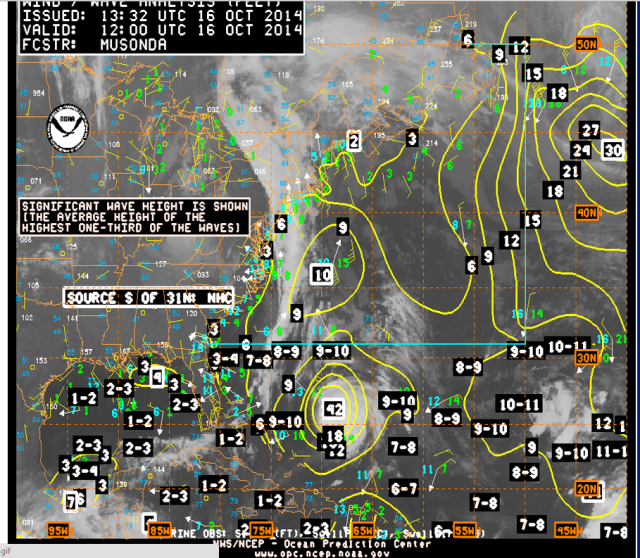 Gonzalo is clearly a big deal, with 42 foot waves and low pressures.   But look at the low in the upper right.  30 foot waves.   And active over a much larger area.  What does all that do?  Maybe suck the heat right out?

Notice how those cold spots are very nearly under those large heat sucking cyclones.   Gonzalo not so much.  (Then again, getting data through a hurricane might be a bit hard

So that’s the thesis for this posting.   It isn’t at all about radiative physics.  The troposphere is all about circular air flows.  Cyclones up and vortex down.   All the radiation happens in the Stratosphere and above.   Now ask yourself:  With a sleepy sun putting out dramatically lower UV; so low that the thermosphere has shrunk and cooled, think maybe, just maybe that stratosphere ‘looking up’ has an easier time getting to space than back when the thermosphere was piping hot?   IMHO, that’s what the Warmers have missed. That their physics of radiation approach matters to the Stratopause, but not to the Tropopause.

A technical managerial sort interested in things from Stonehenge to computer science. My present "hot buttons' are the mythology of Climate Change and ancient metrology; but things change...
View all posts by E.M.Smith →
This entry was posted in AGW and Weather News Events, AGW Science and Background and tagged Cyclone, Global Warming, Gozalo, Hurricane, Polar Vortex, Stratosphere, Troposphere. Bookmark the permalink.

37 Responses to Gonzo Gonzalo and Cyclone Up, Vortex Down