The Palmer Drought Severity Index (PDSI) (known operationally as the Palmer Drought Index (PDI)) attempts to measure the duration and intensity of the long-term drought-inducing circulation patterns. Long-term drought is cumulative, so the intensity of drought during the current month is dependent on the current weather patterns plus the cumulative patterns of previous months. Since weather patterns can change almost literally overnight from a long-term drought pattern to a long-term wet pattern, the PDSI (PDI) can respond fairly rapidly.

The hydrological impacts of drought (e.g., reservoir levels, groundwater levels, etc.) take longer to develop and it takes longer to recover from them. The Palmer Hydrological Drought Index (PHDI), another long-term drought index, was developed to quantify these hydrological effects. The PHDI responds more slowly to changing conditions than the PDSI (PDI).

First thing to notice is that there are many “Palmer Drought Indices” to choose from. What one is used on any one Scare Story about evil Global Warming Drought? Hard to say sometimes… But most of what I’ve seen is, I think, the PDSI.

The Palmer drought index, sometimes called the Palmer drought severity index and often abbreviated PDSI, is a measurement of dryness based on recent precipitation and temperature. It was developed by meteorologist Wayne Palmer, who first published his method in the 1965 paper Meteorological Drought[1] for the Office of Climatology of the U.S. Weather Bureau.

Note that it is NOT a long term average of precipitation. Getting an average 10 inches a year, but having a couple of years a couple of degrees warmer than prior years means you are “having a drought”, even if the rainfall was constant.

Note, too, that it does not state “who’s temperatures?”. I think we can assume it is one of the ‘cooked’ series from NOAA / NCDC / NASA GISS. Structural drought in the definition then, based on historical temperature rewriting adjustments.

The Palmer Drought Index is based on a supply-and-demand model of soil moisture. Supply is comparatively straightforward to calculate, but demand is more complicated as it depends on many factors – not just temperature and the amount of moisture in the soil but hard-to-calibrate factors including evapotranspiration and recharge rates. Palmer tried to overcome these difficulties by developing an algorithm that approximated them based on the most readily available data – precipitation and temperature.

So not even a straight temperature fudge. Nope. An algorithm in it bring in things like soil moisture (measured where? by whom? how often?) and evapotranspiration (so where does the plant data come from for when farmers swap from corn to sorghum and the evapotranspiration changes?) and a general fudge for “recharge rates”… All that fabricated via algorithm from precipitation and (fudged?) temperatures. So not really measured anywhere by anyone for this index.

The index has proven most effective in determining long-term drought – a matter of several months – and not as good with conditions over a matter of weeks.

I’ll say. See below where we have another “flooding drought”…

And we get customized waffle parameters by location…

Critics have complained that the utility of the Palmer index is weakened by the arbitrary nature of Palmer’s algorithms, including the technique used for standardization. The Palmer index’s inability to account for snow and frozen ground also is cited as a weakness.

Not good with snow and ice, so we can have a frozen snowy drought. I’m also not liking that “arbitrary” nature.

The Palmer index is widely used operationally, with Palmer maps published weekly by the United States Government’s National Oceanic and Atmospheric Administration. It also has been used by climatologists to standardize global long-term drought analysis. Global Palmer data sets have been developed based on instrumental records beginning in the 19th century. In addition, dendrochronology has been used to generate estimated Palmer index values for North America for the past 2000 years, allowing analysis of long term drought trends. The Index has also been used as a means of explaining the late Bronze Age collapse.

But everybody is using it. And they even have a version using tree rings to hindcast temperatures and precipitation… Gee, what could go wrong.

Has a nice map of the severity of drought in Texas. For those not familiar with Texas cities, I’ve included a link to a map of the State with roads on it. Fort Worth is part of the Dallas / Fort Worth metroplex and is to the west of where that large knot of roads come together near the top right.

Notice when you look at the outline of the top of the State that Fort Worth is just below a ‘wiggly straight’ section where a drop happens. Then look at the drought map for the same area. (Hint: It’s the dark red blob area…) 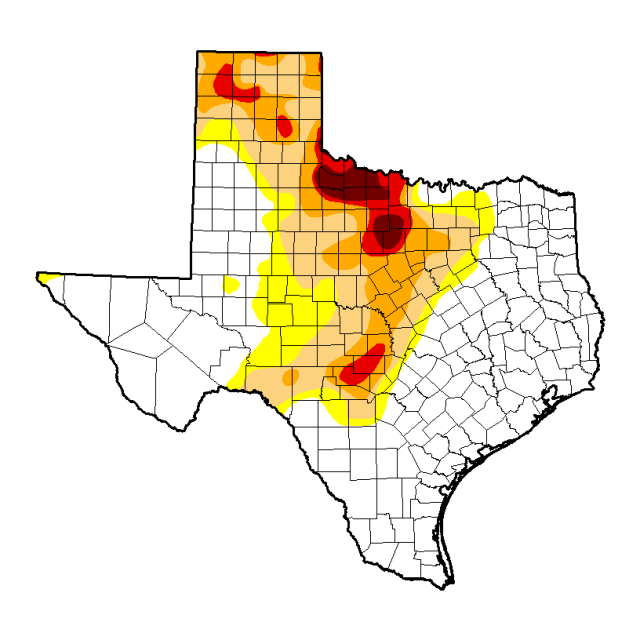 So what is actually happening there? Right now Texas is having rain and thunderstorms over the north of the State, per the news on TV. But here is a news report from early April. Plenty of time for it to have been reflected in the “Drought Index”…

The Arlington Heights neighborhood in Fort Worth is dealing with the damage from flooding Monday. News 8’s Lauren Zakalik has more.

FORT WORTH — A Flash Flood Warning has expired for Collin County and parts of Denton and Grayson Counties after one to two inches of rain fell over Tarrant and Denton Counties earlier Monday.

Meteorologists expected scattered showers and thunderstorms to hit North Texas overnight. A Severe Thunderstorm Watch was issued for counties in the southern portion of the WFAA viewing area through 11 p.m. Monday, but it was later canceled.

“It just comes this way and heads that way; it’s just horrible,” she said.

De la Cruz was talking about the gushing, rushing water that turned her quiet Fort Worth street into raging rapids on Monday. Her neighbor shot incredible video of the water rushing through backyards and funneling onto Carleton Avenue near Interstate 30 and Hulen Street.

It also has photos of cars partially under water…

[…]
It all happened Monday morning around 10 a.m., when downpours hit Fort Worth. The gushing waters also ripped up two roads in the area.

On the next street over, city crews were hard at work clearing debris from roads and patching up the holes. It’s a road they’ve been down before.

There is then another video titled “Flash Flooding in Arlington Heights” which is right next to Fort Worth.

WFAA reporters and editors documented the flooding issues throughout the day on Monday:

1:30 p.m. Atmosphere is pretty spent after AM soaking, but we’ll be watching for additional storms as front moves south of DFW. – WFAA Weather team

11:03 a.m. A Flash Flood Warning is in effect until 2pm for Collin Co. and portions of Denton and Grayson Counties. – WFAA Weather team

Then another video titled “A dumpster was caught on video floating down a street on the UNT campus in Denton. StephanieK, WFAA viewer”

Denton is a town directly north of Dallas. Looked at buying a house there once, about 20 years back.

9:30 a.m. Live coverage shows a vehicle submerged in flood waters in Fort Worth. The driver got out safely.

9:20 a.m. Police say flooding is spotted at Hulen and I-30. Drivers are urged to use caution.

It goes on from there with more photos and more reports. Also some nice weather radar showing the event. 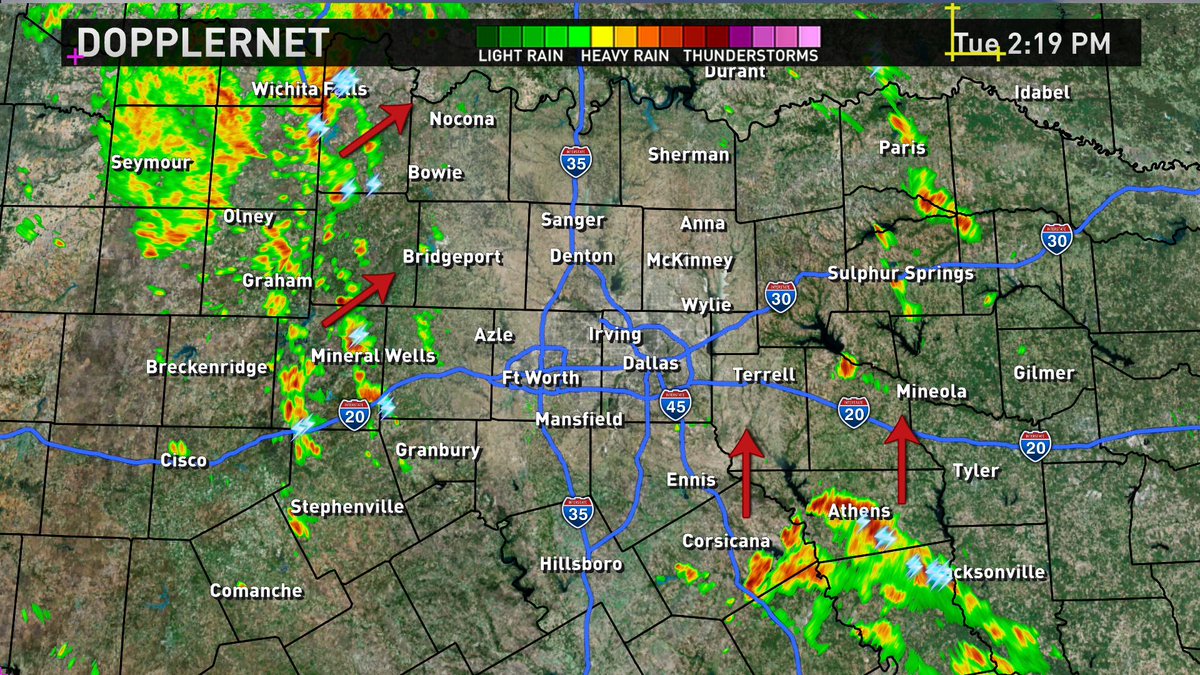 Well, I guess we can add another thing to the horrors brought to use by Global Warming. The “Drought Flood”… Be sure to keep the boat ready for escape, and have sandbags for the doors. Never know when that drought is going to flood you out and you will need to boat down the road. Watch out for the floating dumpsters, though…

A technical managerial sort interested in things from Stonehenge to computer science. My present "hot buttons' are the mythology of Climate Change and ancient metrology; but things change...
View all posts by E.M.Smith →
This entry was posted in AGW and Weather News Events. Bookmark the permalink.

17 Responses to Another Flooding Drought – The Broken Palmer Index