It looks like they’ve been known since the late 1800s, and are still being talked about. The basic idea is a roughly 30-34 year and / or 45 year periodicity of weather (climate) that is sort of a harmonic of solar cycles / sunspot cycles. Gee, the sun driving our climate, who knew? …

This article claims the same / similar cycle shows up in all sorts of interesting places (thus a big “Dig Here!” for later)

Abstract
Cycles of about 35 years found in the climate by Brückner and Egeson were aligned with periodic changes in the length of the solar cycle by the Lockyers. The solar-cycle length and climate were subsequently revisited without reference to any cyclicity or those who discovered it. The descriptive statistics of Bruckner and Lockyer were repeatedly questioned and, with notable exceptions, have been forgotten. Bruckner’s data, taken from his summary chart, are shown here for the first time inferentially statistically validated as nonstationary (to the point of intermittency) and, as transdisciplinary, extending from meteorology to 2556 years of international battles; to 2189 years of tree rings; to ∼900 years of northern lights; to 400 years of economics; to 173 years of military affairs; and to ∼40 years of helio-, interplanetary- and geomagnetics matching a longitudinal record by a healthy individual who self-measured his heart rate and mental functions (with a 1-min time estimation), among other variables. Space weather, mirrored in the circulation of human blood, can be tracked biologically as a dividend from self-assessed preventive health care including the automatically and ambulatory-recorded heart rate and blood pressure for detecting and treating heretofore ignored vascular variability disorders. A website providing free analyses for anyone (in exchange for their data) could serve any community with computer-savvy members and could start focusing the attention of the population at large on problems of societal as well as individual health. Space weather was found to affect the human cardiovascular system, and it has been supposed that data on space weather can be inversely assimilated from biological self-monitoring data.

But this one was the really interesting one:

Here’s a screen shot of the conclusions. They find that the reason it has a couple of various lengths is due to there being different harmonics interacting during periods of high and low sunspots. I think this matters, especially for all the folks who do a simple “looked for one frequency and didn’t find it” as sometimes seen at WUWT: 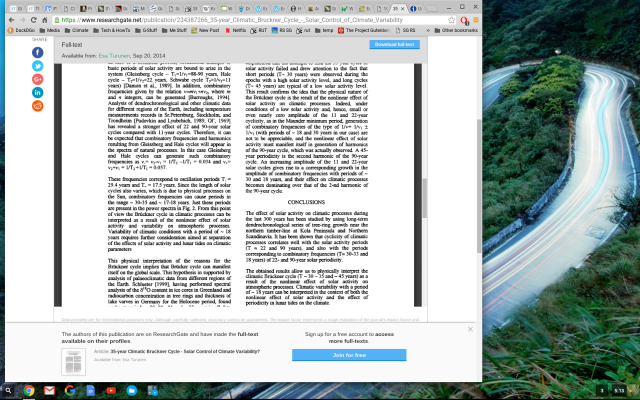 I found the whole article a quick and easy read, and you can download the PDF. It’s a very nice set of thought ticklers in it…

A technical managerial sort interested in things from Stonehenge to computer science. My present "hot buttons' are the mythology of Climate Change and ancient metrology; but things change...
View all posts by E.M.Smith →
This entry was posted in AGW Science and Background and tagged Bruckner, climate, Cycles, sunspots. Bookmark the permalink.