https://chiefio.wordpress.com/2019/01/27/w-o-o-d-26-january-2019/
and remains open for threads running there (at least until the ‘several month’ auto-close of comments on stale threads).

Venezuela draws closer to “regime change”. Watched a video about the involvement of China there. Seems they have pumped in a load of cash in exchange for promises of future oil. Meanwhile another news report showed a Russian Cargo jet loading up – the speculation being it was the 20 tons of Gold that Venezuela had, being sent to Russia as “payment” on their $Billions debt for military gear and such. Looks to me like their Socialist “Friends” stripping the Venezuelan Citizens of their valuables. Then the EU “timer” ran out so the UK, Germany, France and maybe a couple of others recognized the new guy. Italy didn’t nor did a bunch of the Little People Countries, so it wasn’t an EU wide thing. Still, the pile against Maduro getting bigger

In the UK, T.May has decided “Plan B” is to have a re-vote on “Plan A – Satrapy” once the EU again refuses to change it and the timer has run out. Twisting the fork in the roast a little, the EU has said they might, maybe, be OK with a 6 month extension of time to leave. Yeah, that’s the ticket, another 1/2 year of uncertainty and twisting in the wind. Just get it over with already. Then Parliament has voted to NOT accept WTO rules Brexit, NOR to extend the deadline, NOR to accept the T.May “deal”; bit it MUST have a border that isn’t a border with North Ireland – in otherwords, to do nothing and require the impossible. IMHO there is no way in hell that anything substantive can be done in the few weeks left. 20-something Parliament days.

In France somewhere around 17 people in the Yellow Vests protests have lost an eye due to the police “flash bang” grenade guns; so now they are protesting the tactics used against the protesters. I suggest they all go buy motorcycle helmets with strong faceplates. Protects against head banging and sprays directed at the eyes too. (not so good against tear gas…) Or change their Government…

The SPY chart has completed a rebound run to above the SMA stack and right in the middle of the prior range bound area (three tops and 2 1/2 bottoms in a row in the same range) as the shorts covered from the plunge of December. If you didn’t time December right, in either direction, it will either be a loss or a NOOP. (No Op or no operations, a computer term meaning nothing happens). Timing to the week or shorter granularity is swing trading, not investing, and needs daily tending to get it right. Basically, you need to be a computer or a day trader to trade that fast.

Note that while DMI and MACD are “blue on top” (and have been for a while saying “trade in”) volume has decayed to abysmal levels in this up run. That speaks to a direction change and a return to the SMA stack. This will either punch back through in a market rollover, or bounce off the SMA stack to confirm the new bull run. IMHO, it can’t confirm a bull run with that kind of volume decay. Yes The Fed did not raise rates. That isn’t a ringing endorsement, just a removal of a knife in the ribs.

As 75%-85% of market volume is now machine trading you know what most Big Money has chosen. That is why I’ve been less active, BTW. The market access and trading rules are now highly biased not just against “The Little Guy” but any human being at all. Computers read (scan) the news feeds for key words and IMMEDIATELY initiate trade strategies – even if you have a direct Reuters or Morningstar news wire, you can’t read fast enough. By the time you read “earnings miss” they have already sold short 20%+ of the outstanding shares…

I expect SPY will ‘muddle about’ in the same range bound area for a while before a direction is picked.

I’ve made decent progress on graphing in Python / Numpy / Mathplotlib. While a bit annoyed that you must learn a couple of huge libraries (not just the language…) to get decent array handling and graphics, at least the facilities are there. It’s the usual trade off in Object Oriented design – you can learn the basics of the language fast, but then spend months to years wandering in all the libraries of functions to find what has already been written to “save you time”… Oh Well, I have it running and even made an area proportional map of thermometers last night. For anyone who missed it (the thread already being long and it is in the third update) here’s the graph: 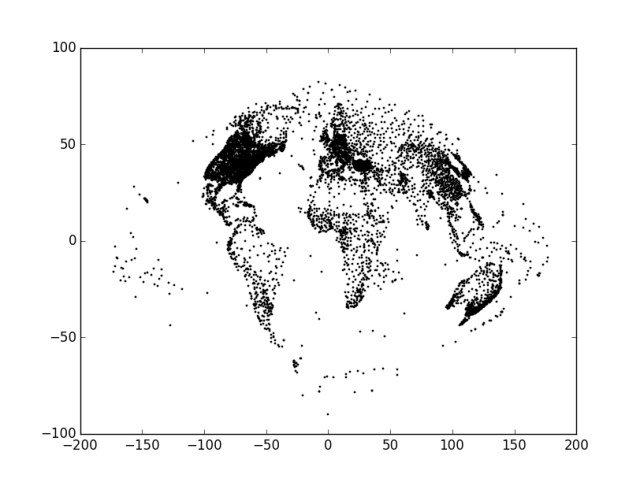 Still needs a “border around the world” and removal of the “white border space” Python supplies by default (range beyond 90 / 180) along with labels on the axis and graph, but at least you can see that we heavily sample a few spots on the planet while the rest is very thin or not at all.

Oh, and “Honorable Mention” to the NFL having a football game instead of a Political Rally. Keep it up a year or two and I might watch your games again. I’ve scrupulously avoided even watching the excerpts and snips on the Roku. Inject “Political Activism” into your product, you are dead to me for a couple of years, minimum. Less than zero tolerance for that crap.

It looks like every loose screw Democrat has tossed their hat into the ring for a Presidential Run. I suspect they know Hillary is a corpse in pantsuit and it will be an open field. Then they make the mistaken assumption Trump WILL lose. Um, no. There’s a whole lot of us who are just quiet and waiting. We don’t take polls, don’t answer phone calls from unknown numbers, don’t shout at CNN reporters. We’re pleasantly surprised at the list of campaign promises kept. He’s got my vote for a re-up (something that was NOT guaranteed BTW. I just voted for him to give a Peptic Moment to the Dimocrats and to assure Hillary was out. He’s surprised me by being a good and effective President, so OK for round 2.) Given the field os OMG Dumb Left Wingnuts the Dims have “on stage” at the moment, Trump will have an easy 2nd term. It will up to the Democrats With Brains to decide not to run one of those numb-cortex folks and find a decent President-In-Waiting to actually run. Not someone corrupt like Hillary. Not a Socialist like Bernie. Not a rabid frothing brainless apparatchik like the other 1/2 dozen (Booker, Pocahontas, Occasional Cortex…). Gee, only a year+ to go and already we’re having the Campaign Follies.

Odds ‘N Ends: Spain prepares to prosecute (or persecute?) the folks leading the political movement in Catalonia. Nice way to win over all the folks who supported them /sarc;… Unemployment is still at God Awful levels in Greece, Italy, etc. of the EU; yet Merkel, Macron, etc. ran off to sign the “Flood us with unemployed low skilled 3rd worlders” agreement; so either destruction or revolution in their future – or political change writ large. The Polar Vortex has been having a fine time making big lobes in the jet stream The kind I remember from the ’50s and ’60s (yes, I watched the news as a kid, and the weatherman – it WAS a man – put up jet stream and wind graphs. KHSL Ch. 12 – Chico as I recall it.) So we’ll have alternating Freezer & Warm as the lobes jiggle back and forth with Big ‘Ol “Mobile Polar Highs” freezing your “bippy”… Nothing new, just returning to the start of the cycle.

So no vacations in Europe or The North for us for a while. Nor Latin America… too many refugees / migrants. The South of the USA looks good, as do the Tropical Islands world wide. I’d love to do Australia / New Zealand again, but that’s more money than I’m going to spend right now… See you on the beach in August? ;-) I’m thinking getting the Spouse down to the Florida Keys might be nice. Putter along in an RV from key to key for a couple of weeks? Hmmm….