This is a point I’ve made before, but mostly with reference to local areas like Alviso, where once Liberty Ships were launched and now it is a salt marsh / mud flat. Boston and San Franciso also have a history of water turning to land. But here’s an example of a place where it is quite obvious.

Thermopylae. Where The 300 held off the Persians for 3 days.

The Wiki says it is all due to sedimentation. Since there are many other historic ports around Turkey and Italy that were once sea level, now found miles inland, I suspect some amount of land uplift or ocean level drop is also involved. But even if it is “only” sedimentation; what happens when that much sediment is put in a bowl full of water? It displaces water to somewhere else and the overall level rises naturally. For the global ocean, this is offset some by subduction, plate spreading, and mountain building processes. Accounting for all that to find a net sea level change due to any one cause is just folly.

But on to Thermopylae:

The land is dominated by the coastal floodplain of the Spercheios River and is surrounded by sloping forested limestone mountains. There is continuous deposition of sediment from the river and travertine deposits from the hot springs which has substantially altered the landscape during the past few thousand years. The land surface on which the famous Battle of Thermopylae was fought in 480 BC is now buried under 20 metres (66 ft) of soil. The shoreline has also advanced over the centuries because of the sedimentary deposition. The level of the Malian Gulf was also significantly higher during prehistoric times and the Spercheios River was significantly shorter. Its shoreline advanced by up to 2 kilometers between 2500 BC and 480 BC but still has left several extremely narrow passages between the sea and the mountains. The narrowest point on the plain, where the Battle of Thermopylae was probably fought, would have been less than 100 metres (330 ft) wide. Between 480 BC and the 21st century, the shoreline advanced by as much as 9 km (5.6 mi) in places, eliminating the narrowest points of the pass and considerably increasing the size of the plain around the outlet of the Spercheios.

So, golly, sea level changes all by itself, often by a lot. If the sea is not rising fairly fast, erosion fills in the shore and the sea retreats. Hmmm…. Not the narrative we’re being sold, is it.

Tell me again why a cm / century or so of “sea level rise” matters in that context?

Now also note that statement of shoreline movement between 2500 BC and 480 BC. What was happening then?

Oh, gee, there was a big hot mountain and then it dropped into a cold bit for the Greek era. (I note in passing that Greece was founded by Ionians and Dorians migrating southward in a hurry… wonder if they were running away from the encroaching cold further north?). So let’s see, it was hotter, and the water was much higher in the pass, then it got colder, and the water dropped, but now the water is farther away, but it’s because sedimentation has overwhelmed all our spectacular heat?

It looks to me like folks are just not accounting for the actual changes of historical temperatures very well. Sure some of it, maybe even most of it, is sedimentation (a bit of core sampling would be in order, IMHO, to get real data on prior floor level). But just as clearly, the pre-historic runs back and forth of the shoreline are not due to humans. My speculation would be that our “run up” from that deep cold bucket of the Little Ice Age is in fact not as high as we think (or that chart plots).

Here’s an interesting map from the wiki: 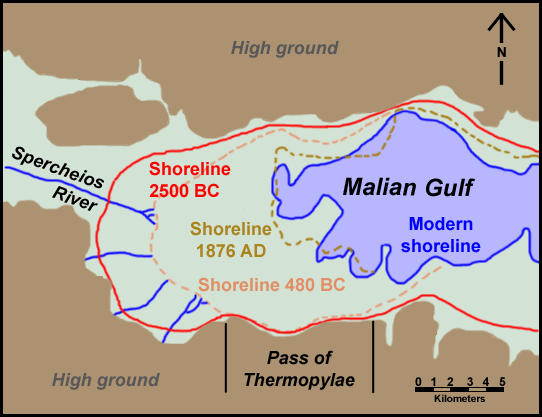 So shorelines move 10 or 15 km all on their own naturally. This means it’s my fault if it moves a foot just how again? Shorelines are living dynamic things. Most often sedimentation moves shorelines outward. Sometimes it moves inward. Mostly it wobbles back and forth in about the same areas, as attested by lots of erosion features both above and below present shorelines globally. The quest for a fixed immobile shoreline is folly of the tilting at windmills kind.

A technical managerial sort interested in things from Stonehenge to computer science. My present "hot buttons' are the mythology of Climate Change and ancient metrology; but things change...
View all posts by E.M.Smith →
This entry was posted in Global Warming General, History and tagged Level, Rise, Sea, Sedimentation, Shoreline, Thermopylae. Bookmark the permalink.