Immediate prior one here:
https://chiefio.wordpress.com/2018/04/27/w-o-o-d-26-april-2018/
and remains open for threads running there
(at least until the ‘several month’ auto-close of comments on stale threads).

This is Victory Day in Russia.

Victory Day is a holiday that commemorates the surrender of Nazi Germany in 1945. It was first inaugurated in the 16 republics of the Soviet Union, following the signing of the German Instrument of Surrender late in the evening on 8 May 1945 (after midnight, thus on 9 May Moscow Time). The Soviet government announced the victory early on 9 May after the signing ceremony in Berlin. Though the official inauguration occurred in 1945 the holiday became a non-labour day only in 1965 and only in certain Soviet republics.

In East Germany, 8 May was observed as “Liberation Day” from 1950 to 1966, and was celebrated again on the 40th anniversary in 1985. In 1975, a Soviet-style “Victory Day” was celebrated on 9 May. Since 2002, the German state of Mecklenburg-Vorpommern has observed a commemoration day known as the “Day of Liberation from National Socialism, and the End of the Second World War”

So looks like at least one German state recognizes it was a brand of Socialism from which they were liberated.

Watching RT is interesting. On the one hand, they are correct to point out that with some 26 Million dead, they did the heavy lifting in W.W.II especially against Germany. Claims that the USA was the major actor in Europe are clearly in error. Yes, my Dad did a LOT from landing in Normandy to ending in Germany, but we didn’t lose nearly so many soldiers nor field nearly so many tanks as the Soviet Union.

OTOH, the USA and UK didn’t just fight a 2 front war, we fought a 3 front war. Africa / Italy. France / Germany. Japan / Southeast Asia. Russia did little in the Pacific other than a mad dash into Northern Japan as it crumbled.

Looking strictly at the casualties, it would seem that the Red Army came off the worst, but it was mostly a draw. The fighting cooled the ardor or Imperial Japanese Army fire-eaters for a war with the Soviet Union and showed up Japan’s unpreparedness for mechanized warfare. It also convinced Soviet leaders that a war in the Far East with Japan could be a costly distraction.

So Japan and the Soviet Union did a deal: the Soviet-Japanese Neutrality Pact in 1941. The pact left Japan free to turn its attention on a war in the Pacific and the Soviet Union to focus on the looming threat of the Third Reich. After Stalin determined that Japan would be true to its word in late 1941, he was able to drawn down desperately needed troops in Siberia and feed them into fighting around Moscow where they helped stem the Wehrmacht tide.

As World War II ground on, Stalin saw an opportunity in the Far East to roll back the results of Russo-Japanese War and pick up the Sakhalin Peninsula, Port Arthur and give the Soviet Union a comfy buffer zone. That intersected neatly with the US’s main strategic worry: the Japanese Kwangtung Army in China and Manchuria, over a million IJA troops. If Japan decided to pull back in China, the troops could be fed into island garrisons across the Pacific or used to launch an assault on India from Burma.

In 1943 Stalin promised at the Tehran Conference to join the war against Japan after the defeat of Germany. He renewed his pledge at Yalta in 1944 and promised to do so two or three months after Germany’s defeat. Stalin terminated the Soviet-Japanese Neutrality Pact on April 5, 1945. At the Potsdam Conference in July 1945, Stalin promised to declare war on Japan in August 1945.

So I would assert that all three of the main Allied Powers did a huge job, just taking on different roles and major places of focus.

RT is doing a very touching thing. They are having their staff members hold up a photo of an ancestor who fought in “The Great Patriotic War” of W.W.II, along with their names and a description of what each does / did. What is fascinating to me is that they have folks from all the Allied sides showing up. Polish army. British, American, and more. Along, of course, with a fair number of Russians / Soviets.

There’s something powerful about seeing photos of young military folks, with a caption of something like “Defended Stalingrad” or “Landed in Italy” or “shot down over Germany” or “Nurse in Britain”; the photo held by their children or grandchildren now working at RT as writers, cameramen, directors, lighting techs, etc. Makes me think about my own “Immortal Regiment”. Dad landing at Utah Beach somewhere around the 3rd day of the invasion; driving a “Deuce and a Half” truck off of an LST (big landing ship where the nose opens into a ramp)

The 4th Infantry Division landed 21,000 troops on Utah at the cost of only 197 casualties. Airborne troops arriving by parachute and glider numbered an additional 14,000 men, with 2,500 casualties. Around 700 men were lost in engineering units, 70th Tank Battalion, and seaborne vessels sunk by the enemy. German losses are unknown. Cherbourg was captured on June 26, but by this time the Germans had destroyed the port facilities, which were not brought back into full operation until September.

My Dad was a Combat Engineer and was involved with taking up land mines, booby traps, and also rebuilding Cherbourg. After the port was running, then his group headed toward Germany and mostly he blew up bridges or built bridges (as needed) all the way; along with more mine fields and booby traps.

So take just a moment to think of your ancestors or relatives who were involved in that great event. Whatever side, whatever uniform, whatever politics.

Coldest April EVER… but I’m sure will be told it’s the hottest ever. How can such bald faced lying be better illuminated? What can be done when the Trusted Guardians Of Truth turn out to be paid liars?

So Trump is going to try the same “in your grill” tactic that worked on North Korea with the religious fanatics of Iran. I doubt it will work. Too much arrogance in Iran. They believe their own Bull Shit too much.

Wobbly flat for a month and a half. Perhaps basing for a rise. I need to do a more in depth look now that it’s not just rolled over.

Mueller got spanked by a judge. One can hope things break loose now. I’m still waiting for the first Hillary indictment… 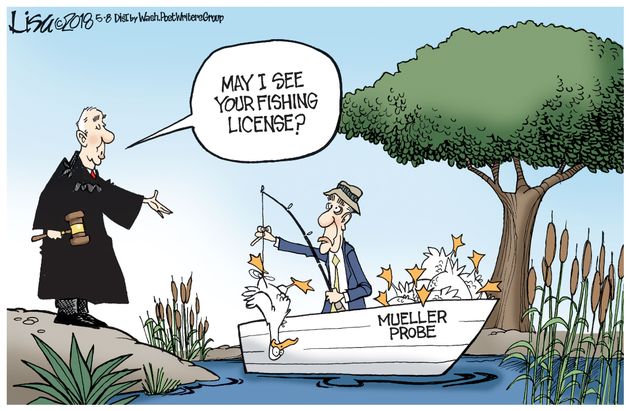 The House of Lords in the UK is trying to scuttle Brexit. Probably need a better understanding of what they are up to, and what it really means.