Yet Another Wrong Way California Breakup

We seem to get one of these every decade or sometimes half decade. A ballot initiative to break up California into 2, 3, 4, 6 or more new States.

This guy, Draper, had a prior proposal to divide California up into 6 parts. This latest one is only 3.

This “plan” suffers the same problem they all seem to have: It divides north from south while NOT dividing Ultra-Left-Wing-Progressive megacities from rural conservative libertarian areas.

For folks not familiar with our counties, here’s a list and map:
https://en.wikipedia.org/wiki/List_of_counties_in_California

The basic problems are San Francisco Bay Area and Los Angeles Basin. The rural counties outside those areas need to be one State, then those two bundles of urban degeneracy need to be their own States. The gigantic county of San Bernardino is itself dominated by the tiny corner with most of the people who are essentially part of Los Angeles. The LA State needs a border that takes that corner, and leaves the 80%+ of the county that’s rural in the rural State.

So what would I do? Marin, San Francisco down to Santa Clara and inland to about Solono County (basically the Bay Area Metropolitan statistical area) ought to be one State. Down south, take the Los Angeles basin Metropolitan Statistical Area that ranges from a bit north of San Diego inland to that small corner of San Bernardino, and north to the area around Ventura ought to make up the second Urban State. Then all the rural parts outside of those areas are the third one. That rural State still would have ports at Stockton, Sacramento, and San Diego, so easy to do shipping as desired. It would have ‘enough’ urban areas to be viable (Sacramento and San Diego are nice sizes), but would mostly be dominated by the rural areas.

The plan that has San Francisco dominating Alpine and Farming counties? Not interested.

There was another one of these a decade or two back that made the stupid decision to name the 2 States that it was going to make with Spanish names. Alta California instead of Northern California. I voted against it just on that alone (though it, too, did not pare out San Francisco from the conservative rural areas). 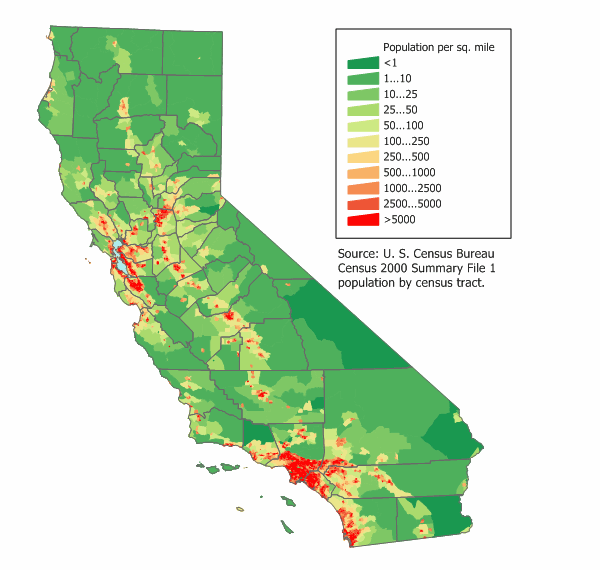 Basically do a carve out of the red blob in the San Francisco Bay area, and the bigger red blob down in the L.A. basin. That does leave the populations of the further south San Diego area and the inland Sacramento Area as potentially dominating the rump State, but then all those central valley farm cities will tend to balance them out. (Though I could be talked into including Sacramento in the SF State and San Diego in the LA State as long as the rural areas near them were left in the Rump State. Even though it would require the sacrifice of the more rural Yolo County as a connector between S.F. Bay Area and Sacramento. (Though frankly once Sacramento was not full of politicians from Southern California and San Francisco working the Capital it would likely revert to the more rural oriented conservative town it was when I was a kid).

It is also important to notice that places like those two counties, near the bottom, that reach from the L.A. basin to the Arizona border, need to have the population dense parts in the L.A. Basin hived off to be part of L.A. and the rural portions set free to be in the rural State.

It is those two urban metroplexes that are the problem. The rest of us have just not been able to eject them…

A technical managerial sort interested in things from Stonehenge to computer science. My present "hot buttons' are the mythology of Climate Change and ancient metrology; but things change...
View all posts by E.M.Smith →
This entry was posted in News Related and tagged California, Divide, State. Bookmark the permalink.

17 Responses to Yet Another Wrong Way California Breakup