In the prior posting on the G70 stove I’d had some trouble getting charcoal briquettes to light (later traced back to damp briquettes). In the process of testing the briquettes, I decided to grill dinner. So proceeded to light a larger pile of briquettes in a more normal ‘flat pan’ portable BBQ. That turned out to not work so well either (how I figured out the briquettes were damp / wet…), but while I waited for them to Oh So Slowly dry out and get lit, I decided to make a Grill out of the G70 bricks while I waited.

(Pedantic Point: Many people call a ‘grill’ a BBQ. Technically that isn’t true. A BBQ is often enclosed, uses much lower temperatures and often smoke. A grill is hotter and often over non-smoking coals with radiant heat, not moist air heat. In this posting I’m not being that exact, so if I call it a BBQ, don’t panic. I know it is really ‘just a grill’…)

The G70 stove is designed for a pot. Even in ‘charcoal mode’ the intent is a slow burning warming burner, not a ‘grill 4 pieces of chicken’. The “grill area” on the top is only about 4 inches square. Great for the bottom of a pot, not so great for a couple of chops or chicken pieces for 4…

I kept the base layer basically the same, but added 2 bricks to make it wider. It is now about the same as the cement concrete pad under it. You don’t really need both of them, but I’m using the big paver to protect my flagstone ‘table’ and as a convenient pedestal for holding the ‘design’ while in progress.

On top of that is a ‘vent layer’ that has air holes on all sides. I don’t know if all of them are needed, but the grill worked well with them. The standing bricks around the outside can be used to protect the vents from direct wind, or damp the vents if put close. I found the one directly up wind useful, but the slow starting damp charcoal made the others irrelevant. In places with more variable wind, or better charcoal, the ability to damp or regulate the air may matter more.

In the ‘vent layer’ I also was trying out a couple of different approaches. A ‘Rotate orientation’ method on the left side / front and a “hang sideways” on the backside. There may well be a more optimal arrangement of bricks that is more symmetrical and esthetic. I was chasing other questions with this layout. What size holes? How big? Does it work well at all? So I made the top layer ‘esthetic’ but the vent layer more ‘designed for changing vents’.

As of now the vent sizes shown worked fairly well. The charcoal is not raised off the base (there isn’t a grate holding them up) for better air flow under the coals, so having more side air seems to make up for that. The charcoal did burn to completion (what looks like a briquette is actually just a pile of ash) and it did cook my burger rather well; so it seems to be ‘about right’.

Mostly what I realized what that with it taking all of about a minute to ‘rearrange the bricks’, there isn’t really any reason to use the G70 Stove as a poor grill. Move a couple of bricks and make it a good grill. If you need a stove, move the bricks back… (or make one of each…) 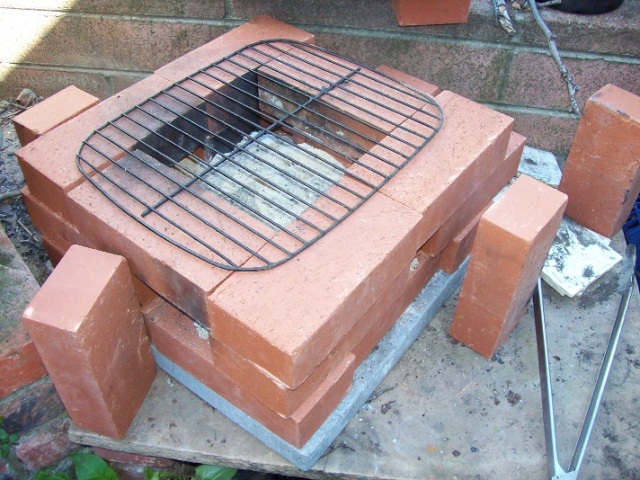 The top layer is very simple. End bricks, side runners. Grill from the portable grill (which is busy starting to rust the bottom pan, but where the top and grill are fine, so both used with this build.) Not in the picture is the ‘lid’ from the old grill. It is used as a heat retaining cover if desired. Any old tin lid would work, IMHO, but this one was laying around.

The bricks standing on end are used to protect the air vents from direct wind, or if put very close, to damp air flow. 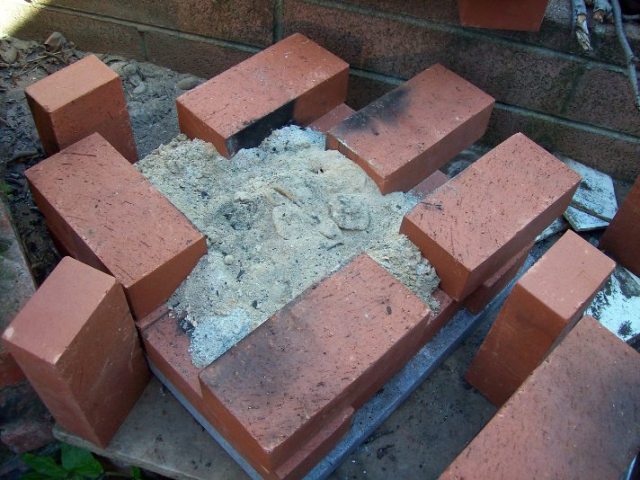 One could likely just continue the ‘rotation’ of the three bricks in the front, left, and rear into a quasi swastika sun pattern (with the right and rear bricks replaced with ‘just one’ and following the rotation pattern). P.C. subliminals aside, I wanted to see if I needed the added bricks (as in the rear / right) for added support of the top layer, or not. If using the ‘sunburst’ pattern, I’d likely slide them in just enough to avoid a cantilever on the top layer bricks. I could also see using 1/2 bricks in the vents instead of the ‘hang out the back’ sideways. But as I’m trying to avoid the need to cut bricks or buy ‘special’ ones, this was an easy test and worked well. It also let me put smaller vents in some positions via brick sliding. In the end, not really needed, but interesting to test.

The POB stands for “Pile Of Bricks”. As that is what this is. After getting past the damp charcoal problem, it worked rather well. Easy to cook ‘food for two’ and likely you could do “food for four” with a bit of effort. The grill area is about 8 x 8 inches. It could easily be made 4 inches longer with one more 1/2 brick width added to the long axis.

That brings up a minor point: The individual grill will depend on the size of grill metal you have available. Yes, you can make any size you like out of ‘expanded metal’ or ‘very heavy wire cloth’ or whatever is available. You could likely even use a slab of steel or sheet metal for a plate grill and just add more side vent area. It will all depend on your grate / grill metal and what kind of Pile Of Bricks you want to build.

In use, I had less trouble adjusting air flow with this POB Grill than with the cheap ( $15 or so ) portable grill it is replacing. that grill had fixed air holes that were, IMHO, too small. It tended to smoke too much, and sometimes go out. An OK BBQ but not easy to use. I often had to put the lid on ‘akimbo’ to get enough air flow. With this grill I don’t have that problem. It also will not rust if left sitting out ;-)

So the lid and grill wire can be washed and put in the garage, while the POB and attendant dirty / ashy parts are just hosed off and left out. Much easier than trying to clean up the sheet metal pan of the prior grill.

Also of note is that there are small disposable grills sold in local grocery stores. A tin foil base with charcoals and built in metal grill. As a cheap source of a minimal grill, one of them is convenient. Then the grill metal could be reused in one of these POB Grills. (Though frankly, I’ve always had other BBQ / Grill appliances have the bottom give out long before the grill surface proper so finding one is likely easy… and replacements are sold new in some stores). In short, there are a lot of places to get the non-brick parts. I have a flat cast iron ‘griddle’ that would work well, bought for campfire use and about the right size.

In the end, the biggest ‘take away’ for me is just that a Pile Of Bricks laying about lets you make a variety of stoves and grills without a whole lot of effort. Buying $20 of bricks and putting them in the back yard is a very cheap and very easy way to ‘prepare’ for ‘bad times’. If the Big Quake happens or if the Big Blow takes your little tin BBQ flying, you will likely find your Pile Of Bricks sitting right where you left them. After a disaster, there is usually a pile of wood and such debris, so fuel is typically ‘around’. Having a place to cook, stay warm, and sterilize water is important, and this is the easiest way to get it that I’ve seen. It is also a lot of fun to play with, like grown up Legos with fire ;-)

A technical managerial sort interested in things from Stonehenge to computer science. My present "hot buttons' are the mythology of Climate Change and ancient metrology; but things change...
View all posts by E.M.Smith →
This entry was posted in Emergency Preparation and Risks, Food and tagged BBQ, Brick, cooking, emergency, Grill, POB, Stove. Bookmark the permalink.